The Cats of Lamu

The Feral Cats of an Exotic African Island
by Jack Couffer 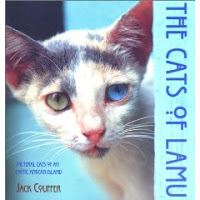 The Cats of Lamu is a beautiful book. Its author was vacationing on a small island off the coast of Kenya when he became interested in the local feral cats. He thought they looked like cats depicted in ancient Egyptian art, and was more intrigued when he learned that these cats had been on the island for hundreds of years without intermingling with other breeds. This book is the result of several years he spent living on Lamu island, studying and photographing the cats.

I first picked this book up in a San Francisco library because it has such gorgeous photos. The story is fascinating as well. Couffer describes how he first fell in love with Lamu, the island culture and his interactions with the natives (most who viewed him as slightly a crazy but harmless foreigner). There are some interesting and amusing stories that have nothing to do with the cats- like that of a local meuzzin who would sing the evening prayers next door to their garden, always studiously ignoring them as politeness required. Couffer and his wife wished to make contact with this man and let him know how they appreciated his beautiful voice, despite the fact that they were not Muslim, did not speak his language, and local etiquette frowned upon even making eye contact. They found a way to do so, and it made me smile. Another story tells about an elderly European woman who had come to the island to enjoy the tropical climate during her retirement. Being a cat lover, she was quite friendly with Couffer. One day by chance the locals came to think she could predict the future, and labeled her a witch. She enjoyed playing up this new status, until a neighboring hotel owner, getting rid of nuisance animals, was rumored to have drowned one of her favorite cats. Then she took her role as village witch seriously and made some threats, with a suprising outcome.

Most of the book however, is about the Lamu cats. Couffer watched the cats as often as he could, followed them around and took notes on their behavior. He came to recognize dozens of individuals, mapped out their territories and speculated on their family relationships. He found that most of the cats lived in groups like lion prides, associating together and sharing food resources- especially the ones that lived on the beach and ate the offal from the fishermen\’s daily catch. Whenever he had a question, he sought the answer. Local chickens roamed freely about the village- why did the cats not eat the baby chicks? Dogs did not live on the island- how would a Lamu cat react to meeting one? Why did the cats eagerly take advantage of some foods- the twice-yearly flight of termites- and ignore others- the hundreds of fiddler crabs on the beaches? How effective were the cats at rat control? The local people did not view the cats as pets, for the most part ignoring them- but was there more to their relationship than that? One of the more interesting chapters describes several well-meaning animal welfare groups that stepped in to vaccinate and sterilize the cats in order to improve their condition, and how that affected not only the cat population, but the sanitation of the town as well. (He was able to keep them from treating cats in his core study group to compare effects on treated populations and one left entirely alone). Couffer examines all these things (and more) with equal curiosity and insight, describing his findings in a casual, eloquent manner. It\’s a delight to read his book, and linger over the beautiful photographs.

some photos of Lamu cats at:
Feline Meanderings