These two books have a lot of similarities. In both, the illustrations are all either computer-generated textured beasts (with varying degrees of quality) or photos of dig sites, skeletons or fossils. The page spreads are all of a main picture with a larger block of text, and smaller pictures around it with descriptions in smaller text. I couldn\’t help noticing that a lot of the images were the same between the two books, even if shown from a slightly different angle. 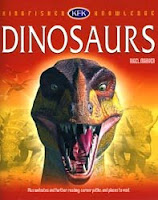 This book describes dinosaurs by the regions in which they lived. First it gives an overview of dinosaur families in general, with a basic family tree showing how the different groups are related, discusses how the original single landmass Pangaea broke up over the centuries into different smaller continents, and offers different theories on why the dinosaurs went extinct. After that the book is organized by geographical areas. In the section for Eurasia it describes where dinosaur fossils were first discovered and how paleontologists uncover them, dinosaur predators found in the Gobi desert, feathered dinosaurs discovered in China, different kinds of pterosaurs (the flying ones), and ancient marine reptiles. The section for the Americas describes Dromaeosaurus which hunted in packs, armored plant-eating dinosaurs, giant sauropods and predatory dinosaurs found in Argentina, discoveries from Hell Creek, Montana and hadrosaurs found in Wyoming. The chapter on Africa and Australia features giant ancient crocodiles, huge sauropods from Madagascar called titanosaurs, different dinosaur tracks found in Australia and dinosaurs that lived in polar regions. I like how this book featured the work of paleontologists, on almost every page you read about how someone made a discovery. At the end of each chapter there is a summary and a text box that highlights different occupations having to do with dinosaurs, museums where dinosaur remains can be seen, and websites and books that give more information. The final pages of the book have a basic timeline showing which dinosaurs or animals were dominant during that period, a glossary and a good index.

This book is organized into broad sections: an overview of the dinosaur age, a part featuring dinosaur predators and scavengers, then plant-eaters and their defensive methods, the biggest dinosaurs, and how they probably died out. It\’s all presented as questions which are then answered, like: did dinosaurs ever get sick? which dinosaur has the biggest brain? did some dinosaurs migrate? I found it very easy to read through. Some of the things I learned from this book were that most meat-eating dinosaurs had only two or three fingers on a hand, whereas plant-eaters had five digits. That some dinosaurs could have had a lifespan of almost 200 years. That some dinosaurs had skin so thick it was practically bullet-proof. That many of the plants dinosaurs ate still exist today. It was all pretty interesting. This book also has a full index.

In both books they mention the ongoing debate of whether dinosaurs were warm-blooded or cold. Perhaps some were one, others the opposite. Maybe they were something in between. On other points the books disagree. One tells me that grass didn\’t exist until after the dinosaurs were all gone, the other says that scientists have discovered grass in a dinosaur\’s fossilized droppings. But that\’s what makes reading about all this so interesting- we\’re always learning something new!