Yesterday I finished the What An Animal III Reading Challenge, hosted at Socrates\’ Book Review Blog. It might seem like something too easy for me, the reader of animal books, to take on a challenge about reading animal books! But I try to stretch myself a bit and have fun here by reading new subjects: animals I never read a whole book about them before. Hm. That sentence is kinda awkward. But I\’m tired. Well! I read about kangaroos, insects and sundry small critters, deer in the woods, oceanic turtles, rats in New York City and squirrels plus other wildlife in someone\’s backyard. The titles (with links to my reviews) were:

Chasing Kangaroos by Tim Flannery
For Love of Insects by Thomas Eisner
The Hidden Life of Deer by Elizabeth Thomas Marshall
Voyage of the Turtle by Carl Safina
Suburban Safari by Hannah Holmes
Rats: Observations on the History and Habitat of the City\’s Most Unwanted Inhabitants by Robert Sullivan

Voyage of the Turtle and For Love of Insects were the best two, by far.

For Love of Insects 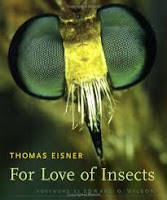 This hefty book, which weighs something like a small textbook but is actually much friendlier (in terms of readability), is all about the insect world. Eisner is an entomologist who was also fascinated by chemistry, and found a way to combine his two passions in studying how insects and other small creeping critters make use of chemicals for defense, communication and other life functions. Honestly, I almost gave up reading it on page 62 because there was so much chemistry involved and it was just over my head. But then I found by skipping over the chemical analysis parts I could still get the gist of what was going on, and read all the interesting bits. Further into the book there are more things about insect behavior that involves chemicals but is not so much about chemistry per se.

The way Eisner describes conducting his experiments really is quite interesting. He would basically take nature walks, just to see what kinds of different insects he could find, and then based on observations and brimming curiosity, create experiments to answer questions about what the insects were actually doing, or how and why they did things. Stuff like why do butterflies \”puddle\”, how do insects circumvent the toxins plants use as defense, or what different methods bugs use to escape a spider\’s web. One brief study describes how an insect creates a camouflage out of its own poo, another how a caterpillar glues flower petals to its back to hide in plain sight. I knew before that bugs emit stinky smells and nasty-looking fluids when you handle them, but I didn\’t know that those fluids are often highly toxic to other insects, and thus used as defense. Some insects can spray acid, or secrete a sticky substance that basically glues up the mouthparts of its attacker. One even shoots mini bombs of something like cyanide!

The part I found most intriguing was about spider webs. Did you know that most spiders take their webs down during the day, and build them again at night? Of the spiders that do leave their webs up in the daytime, they weave patterns in them of a heavier, bright white thread which is easily visible. It\’s to keep birds from flying through their webs. Eisner describes all kinds of cool methods he used to prove this is just what was happening. Even more intriguing, he describes how on the island of Guam spiders used to commonly make these conspicuous weavings. But now, as birds have gone extinct on Guam (which I read about in Oliver Sack\’s book here) spiders don\’t weave the markings into their webs anymore. I find that so fascinating.

Well, if you\’ve found any of this remotely interesting, you really should take a look at For the Love of Insects. I\’ve really only scratched the surface here; there is so much more in the book than I could ever describe. It\’s got lots of very illuminating photographs, as well.