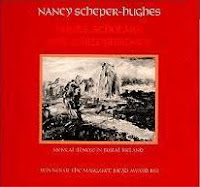 It\’s a bit odd the connections I\’ve found in my reading lately. Sitting in a waiting room flipping through a magazine a few weeks ago, I found an article about new studies that suggest the emotional health of a mother while pregnant can have affect her child- even into adulthood. What stood out to me in particular was the correlation found between mothers who suffered extreme physical and mental stress -such as starvation- during pregnancy, and children who grew up to have mental illnesses, such as schizophrenia. Then while reading Far From the Land, I noticed at one point Rice mentioned that almost every family he knew in rural Ireland had someone with a mental illness. I wondered if this had something to do with the famines Ireland went through in previous generations? I hadn\’t heard before about the prevalence of mental illness in Ireland. So it was with curiosity that I picked another book off my shelf, Saints Scholars and Schizophrenics, which addresses this very issue.

It\’s a case study of an isolated village society on the Western coast of Ireland in the 1970\’s. The author, an anthropologist, spent several years living in the village and taking note of all the customs around her. Particularly the less-known, seldom-spoken of customs that pervaded private households and that, she felt, contributed to the high incident of mental illness in rural Irish communities. It\’s rather a dismal book. Discussed in detail is how the community was slowly disintegrating; commerce failing, young people emigrating away from the island, old bachelors living their lives on lonely farms, few people marrying into the area, even fewer babies born. She paints an image of a community loosing its vitality and being constricted under societal and religious mores that kept them from intimacy- not only between peers who seldom discuss personal matters but also between husband and wife, between mother and child; it seems a whole group of people who hold their distance and then face lifelong frustrations. Most interesting to me was the section that examined family dynamics, particularly how parents\’ expectations of their childrens\’ roles affected the society.

I noted that the author points out that she didn\’t necessarily believe that social conditions were the sole cause of schizophrenia, but that she suspected they would \”exacerbate what may be an initial vulnerability or tendency.\” At the same time she questioned whether the disease could really be hereditary, as it was most prevalent among the elderly bachelors who had no children. For that reason she was looking closely at social conditions to see if there was an underlying cause of mental stress. I also appreciated the introduction, where the author talked about how the publication of her book affected the people she knew in that little village; even though she gave it another name and tried to make the people she mentioned anonymous, many of the villagers easily identified themselves in the pages and were hurt or mortified by what she wrote. I wonder how that little village is doing now, some forty years later.

One thing I didn\’t find in the book that I was half-expecting were descriptions of erratic behavior and how people either ignored or shunned it. Such incidents are only mentioned in passing, and more time is spent divulging information gained from interviews both with families in the community and patients in the mental hospital. There\’s lots of graphs full of data but I didn\’t look at them too closely. Altogether it\’s an interesting, if somewhat somber, book to read.