A Tribute to the Love Between People and Animals 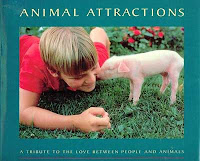 Rather like the previous two books I read these last few days, Animal Attractions is a mostly pictorial work with a few brief essays about the connections we share with other species (particularly cats and dogs). For the most part, this is a really beautiful book. The presented photographs, by a myriad of world-renowned artists, are absolutely beautiful. They depict many sorts of animals. Not just cats and dogs but also chickens, horses, goats, pigs, cows, parrots, elephants, sheep, chimpanzees, a rabbit and a few snakes. The only disappointment I have with the book is (again) the writing. The introduction by Diane Ackerman is eloquent and thoughtful, and really made me anticipate more of the same quality. But there are only three other essays in the book, and they all fell flat for me. The one about cats just tells about the different cats one woman owned throughout her life. The one focused on dogs was a bit more interesting but still, just about one guy\’s dog and how amazing his personality and intelligence was. The final essay, by Peter Beard \”on population pressure and the plight of wild animals\” really confused me. It was several very long sentences listing atrocities mankind has wrecked upon the earth (and ourselves). Shall I give you a sample?

Phew! That\’s one sentence. I looked very carefully. There\’s loads of commas, at least two ellipses, semicolons, colons and more dashes than my brain can process (can you do that all in the same sentence? isn\’t there some kind of rule?) Please tell me if you make sense of that. Because I don\’t. Maybe it\’s just the way Beard writes; horrors if I ever opened a book of his! Although I really shouldn\’t say that, I do have his End of the Game  on my TBR, which I once perused in a bookstore and it was quite comprehensible, none of this jumble. So I really don\’t know what happened here.

It just made my head spin. The Beard essay, I mean (though the end of it was more readable). Overall I was surprised at the unevenness of writing quality in this book. Which is really a shame, as the photographs are so outstanding. I recommend it just to look at, if you like fine-art of books that feature animals.