I don\’t know why I have this thing lately for reading books about people doing experiments to change their lives and live in ways that are better for the environment. It\’s interesting to see how far people are willing or able to go, what challenges they come up against, how they solve them. I guess I also like to compare myself, to imagine if it\’s something I could do, too. Most seem to have one focus; I\’ve read a lot of books (because I like gardening) about sustainable living and feeding yourself. This Organic Life, Farm City and  Animal, Vegetable, Miracle are several titles about people who tried to only eat what they could grow or find within a short distance of home (thus avoiding the costs of food traveling far). This author has alerted me to several more; there\’s a book called  The 100-Mile Diet whose title explains itself, and another where the author tries to do one new environmentally-friendly thing per day: Sleeping Naked is Green.

Anyway, No Impact Man describes Beavan\’s experiences taking his family through a year-long project to see how much they could reduce their carbon footprint on the earth. It\’s pretty impressive that he didn\’t just focus on one thing, like see if we can only eat local for a year, or only use green energy for a year. No, he did it all. In stages, which I think was smart. First, he cut out all the trash their family produced. The used nothing new. They quit buying any food that came in packaging- so only fresh produce, no take-out, not even coffee from Starbucks until he thought to bring his own re-usable cup along. Next they quit using vehicles for transportation, walking and biking everywhere (and taking stairs- they even eschewed the elevator!) Then tried to do without electricity. He flipped the circuit breaker in his apartment and took to shopping for fresh food several times a week, going to sleep when it got dark, stomping on clothes in the tub to wash them, etc.

Oh, and he did this all while living in New York City.

Several interesting things happened. He got a lot of attention for this project. His family was willing to go along with it and even found it fun. He discovered he had a lot more time on his hands and began spending it with family and friends, appreciating the simple pleasures of life. He found his limits: there\’s a point at which doing without in order to save the planet just becomes miserable (washing kid-vomited-on bedsheets by hand?) He also reached a point where it wasn\’t enough simply to reduce his own use of resources or environmental impact, but that he wanted to do something positive and so got involved with local volunteer projects to plant trees, clean up trash on the river, etc.

Can you tell I was impressed by this man?

There\’s been a documentary made of the No-Impact Man project (I think that\’s how I originally found it; saw the title on Netflix). And Beavan has a blog all about it, too.

more opinions at:  The Back Patio
anyone else?

Confessions of a Suburban Homesteader

Joan Gussow and her husband set out to build their retirement home, and instead they built a garden. I kid you not. Her dream home was really picked because of its location on the Hudson river and its long backyard with ample sunny space, but when they discovered the house had to be gutted (and even later, that it had to be torn down and rebuilt) they went ahead and started improving the land and planting vegetables months before their home was tenable. I am amazed already, but go on through my reading to discover that Gussow and her husband have reached their goal of feeding themselves from their own yard- veggie garden, fruit trees and berry patches- when there isn\’t stuff available fresh they eat stored potatoes, onions and parsnips, etc. That impresses me enough, but she goes on to live her environmentalist convictions even further, always questioning where the food she eats was produced, looking for food sources as close to home as she can get them (like Barbara Kingsolver also strove to do) as well as other measures (the book is mostly about food-related ones). One chapter in  This Organic Life is all about things she\’s willing to do without, another is about the nextdoor community garden she helps establish, yet another is about the hard knocks nature deals them- like when the river floods their garden, when wireworms eat her sweet potatoes, when rats destroy her tomato plants. She admits its not easy and worries even more over the state of our nation\’s famers, who must have it even harder. This is such a conscientious, thoughtful, funny and encouraging book I\’m looking already for a copy to add to my personal library. Not to mention that it\’s got recipes, and really good-looking ones, too! Granted, they are all on the spicy side, but my husband likes spicy food! I haven\’t figured out yet what to do with all the hot peppers I grew this year…

I like this author. I like her voice, I like her convictions, I like the fact that she does something about them. I want to read more of what she\’s written, so I\’m looking in my library\’s database to see what they have… nothing! blah. Time to try for another swap, I suppose.

more opinions at
Alternate Roots
Edge of the Page

It\’s been a while, so I\’m doing another bookmarks giveaway. This pair has an Egyptian theme. Simply leave a comment if you\’d like to win them! 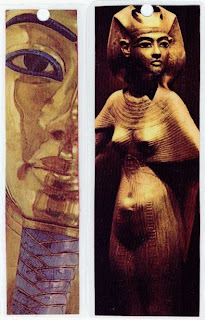 Sorry, giveaway open to mailing address in the US and Canada only.

It runs for two weeks. I\’ll draw a name at random on… the weekend of my birthday! Oct 15.