A Life in the Woods 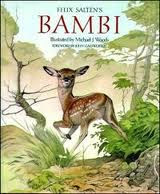 This is one of my most favorite books ever. I read it many times in my childhood, but it\’s been years since I last visited its pages. I happened across a beautifully illustrated edition at the library and borrowed it (even though I have my own copy) to enjoy again with these new images. The paintings by Michael J. Woods really make the forest setting and animals come alive. They are so lifelike, and so expressive at the same time. I paged through the book several times after reading it, just to look at the pictures again. (click on images to view them larger) 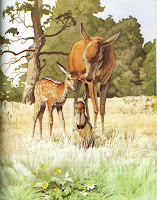 Bambi tells the story of the life a deer leads in the forest. It begins with his birth and follows him through the unfolding of his understanding, from the first questions he asks his mother- reminiscent of any toddlers incessant why is the sky blue? but why? – to his playful explorations in the meadow to his youthful feelings of invulnerability. He soon learns that the forest isn\’t safe at all, often full of dangers. For some time the exact nature of danger is unclear as his mother is unwilling to speak of it and he speculates with his playmates what it could be. But soon enough he learns about the threat of man, who seems to be an inescapable and incomprehensible horror. This combined with the hardships of his first winter make Bambi realize that life is a very serious thing indeed. 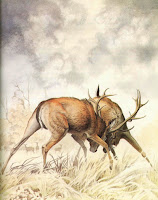 In fact, a lot of the book deals with themes of facing mortality and the constant threats to life. Bambi sees plenty of other creatures die, from his mother to other deer they associate with; a squirrel gets its throat torn out by a predator, crows attack smaller creatures, a dog relentlessly tracks down an injured fox, etc. And yet he finds plenty to delight in as well. His first experience of the mating season is a time of giddy passion, surging emotions that culminate in fights with the other bucks (although there\’s nothing \”twitterpated\” here at all). He also takes simple joy in his surroundings, the colorful flowers, birdsong, warm sunshine etc. The nature writing is wonderful, beautifully evoking the seasons and surroundings of lush plant life and bird voices. As Bambi moves into adulthood his life becomes more solitary and then he begins to associate closely with an older stag of the forest, who mentors him and shares his wisdom. 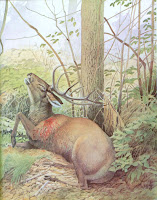 One of the most interesting parts of the books is about another deer named Gobo whom Bambi grew up with. During their first winter Gobo collapses in the snow and is rescued by a hunter. The other deer are all shocked and amazed when he reappears healthy and well later on. But even though Gobo survived at the hands of Man, he is now unfit for life in the forest and his inability to live as a wild deer is painfully illustrated. Another part of the book also shows how the animals interact with mankind: when the fox is tracked by a hound they end up arguing about their relationships to man. The fox sneers at the dog for being a traitor to animals by serving man; the dog asserts that man is good to those who work for him. Other parts of the story that also show how humans affect wildlife, as in when a massive tree is chopped down and many small creatures are suddenly homeless. 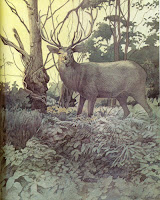 I could go on and on, but I won\’t tell you more because I want you to read the book! I think most people are only familiar with the Disney film version of Bambi, and that\’s a shame. There are few similarities, namely the early death of Bambi\’s mother. There are no giggling bunny and skunk friends; the Hare Bambi meets is a serious creature and the Owl he knows is a little screech owl who delights in trying to frighten others with his shrieks. There is no fire in the book, and the threat of human hunters is much more prominent. This story is so different, much deeper and so beautifully written. I wish more people would read it, especially to their children.