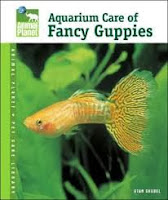 Guppies are not really my thing- I think they look so flamboyant with the long flowing tail all out of proportion to the body- but they are definitely popular, a common beginner\’s fish and readily available. I can see why people find them beautiful. And there are so many varieties, I actually found a few I do like (from the photos in the book)- the snakeskin patterns and short-tailed ones I think are very pretty (especially the blues).

Well, so this book like all others tells you how to set up an aquarium and take care of the fish, a little bit about their biology and behavior. No news there. I find it interesting how each of these fish books has a slightly different focus. The last one was all about being methodical and scientific- testing assumptions to find out what was really going on, or how to best do something. This book places emphasis on how relaxing and stress-relieving watching the fish in the aquarium can be- good for our own health in that way! Also, how beneficial it is to get children involved in fishkeeping at a young age. Mostly though, its focus was on genetics and breeding strategies. It seems the book was aimed at those who want to breed their guppies, so there was a lot of info on how to select good stock, and how to get the colors and tail shapes you want, and problems that might arise. Also, there was an entire chapter about guppy shows- how to get involved in them, select your specimens, ship them to the show, etc. I found all that interesting just because I know nothing about fancy fish shows! A downside to this book is that its focus is so wrapped around fancy fish breeding that unless you\’re into that, you might not find it very useful. I found myself getting bored with all the genetics stuff.

One extra feature was at the back of the book- a glossary describing terms about fish and aquarium keeping. It was so informative I found myself reading those pages just to glean some information, but at the same time I found it puzzling. I read the entire book in one sitting, and I\’m pretty sure some of those terms explained in the glossary were never actually used in the text of the book.

The book\’s serious flaw is that the pictures are not good. In a book like this I expect at least decent pictures, especially when you\’re talking about how beautiful this fish or that one is. But a lot of the photos were out of focus or had glare. And many of the images that had been cropped out of their background to float on a page had some terrible editing going on. Pieces of the tail missing, but you could still see the outline, where it was supposed to extent to. Patches of the body with the color all gone, texture of scales still there. Maybe their printing is bad but someone made a serious mistake on the pictures in this book, and it annoyed me. Exactly like the few I found in Aquaruiums, but here far too many.