One glimpse of a pest will put me into a frenzy of cleaning. I saw this again– just one, scurrying away from the door, but twice as big as the few I saw last year (and never again since, until now). Prompted me to spend hours today super-cleaning the front part of my apartment- doing things I usually neglect- like moving furniture and using the nozzle attachment to get into all the little crevices where walls meet the floor, emptying my front hall closet to thoroughly sweep the floor (discovering that my kids have too many shoes. My three year old has more shoes than I do!) And, of course, I went through all the bookshelves. Removing books, dusting, fanning the pages, flipping the shelves, replacing. Again and again. Looking for signs of silverfish- sprinkles of their droppings, white dust of shed skins and most of all, chewed-on pages. Examined very closely my older, used books some already yellowed pages and tattered edges. Thankfully no signs of insect damage. So wherever those things come from, at least they haven\’t found my little library yet. But of course going through all the books makes me treasure them again. And this time I had an eye to what my daughter might like to read.

She\’s about to turn ten, and reads at a sixth or seventh-grade level. I used to have a lower shelf with some books sorted on it just for her selection, but she seems bored with that. I\’ve found that she doesn\’t much like the animal stories that enthralled me as a kid, so I will probably never get her interested in Black Beauty or The Yearling. She likes stories with magic or mystery in them, and also historical fiction- she read a ton of the Magic Treehouse series and the older Nancy Drew books a while back. She loves Harry Potter, has seen all the movies many times, but so far only read one book of that series! So I\’ve tagged a bunch of books off my shelves, to suggest and hope she\’ll read them. I\’d love for her to love the books I\’ve loved!

Half Magic by Edward Eager
Socks by Beverly Cleary
Behind the Attic Wall by Sylvia Cassidy
The Secret Garden by Frances H. Burnett
A Little Princess by Frances H. Burnett
the Dark is Rising series by Susan Cooper
Fox Farm by Eileen Dunlop
Summer Pony by Jean Slaughter Doty
Julie of the Wolves by Jean Craighead George
the Kitchen Madonna by Rumer Godden
Dogsbody by Diana Wynne Jones
Ella Enchanted by Gail Carson Levine
A Wizard of Earthsea (and its sequels) by Ursula K. LeGuin
A Wrinkle in Time (plus sequels) by Madeline L\’Engle
A Book Dragon by Don Kushner
The Moorchild by Eloise McGraw
Bridge to Terabithia by Katherine Paterson
all the Harry Potter books by J.K. Rowling
the Iceberg Hermit by Arthur Roth
Summer of the Monkeys by Wilson Rawls
the Changeling by Zilpha Keatly Snyder
the Egypt Game by Zilpha Keatly Snyder
Peter Pan by James M. Barrie
Jonathan Livingston Seagull by Richard Bach
the Neverending Story by Michael Ende
the Bronze Bow by Elizabeth George Speare
Dragonsong (and its sequels) by Anne McCaffrey
Amy\’s Eyes by Richard Kennedy
the War Between the Pitiful Teachers and the Splendid Kids by Stanley Kiesel

Yeah, lots of those are classics or animal stories- but one can always hope!
I\’ve got another selection for a little further on, when she\’s a bit older (some are more complex and I\’d think she\’d get bored- others the content is a just more mature).

the Lastborn of Elvinwood by Linda Haldeman
Thursday\’s Children by Rumer Godden
Beauty by Robin McKinley
Hero and the Crown by Robin McKinley
the Blue Sword by Robin McKinley
Jacob Have I Loved by Katherine Paterson
the Fur Person by May Sarton
Ratha\’s Creature (and all sequels) by Clare Bell
Bright Candles by Nathaniel Benchley
Light a Single Candle by Beverly Butler
Kissing Doorknobs by Terry Spencer Hesser
Sabriel (and sequels) by Garth Nix
the Mimosa Tree by Vera and Bill Cleaver
the Hobbit by J.R.R. Tolkien
Tom Sawyer by Mark Twain
Tailchaser\’s Song by Tad Williams
Saturday the Twelfth of October by Norma Fox Mazer
Izzy Willy Nilly by Cynthia Voigt
A Solitary Blue by Cynthia Voigt
Nightpool by Shirley Rousseau Murphy
the Ivory Lyre by Shirley Rousseau Murphy
Wringer by Jerry Spinelli
House of Stairs by William Sleator
Interstellar Pig by William Sleator

(what do you think of my picks?)

I\’ve made a little system, quite simple. I put a paper strip in the selected books, sticking out, with the title written on it. When my kid wants to read a book, she can just give me the slip of paper and then I know which one she\’s borrowed. I think she likes the idea that she gets to \”check out\” books from mom\’s library, ones earmarked especially for her.

The little one is growing into a reader too: 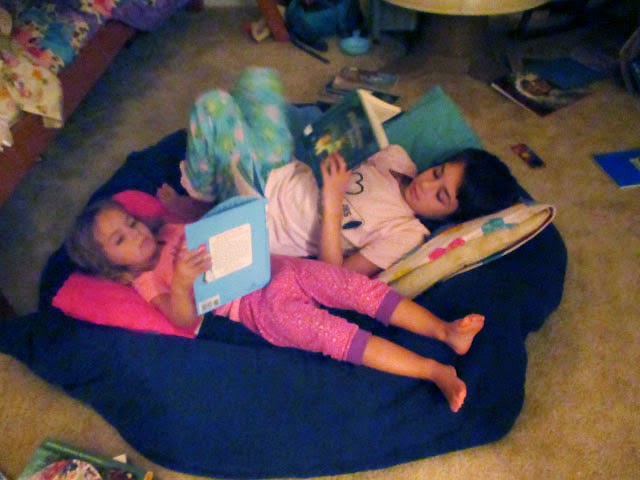