a celebration of the Lowlands and its peculiar inhabitants 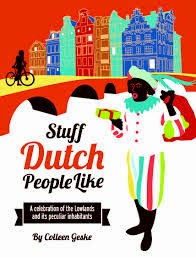 My boyfriend brought this book home from travels, and I read it in one sitting. He got me intrigued by thumbing through it pointing out highlights and laughing at how true all the points in the book are. It\’s based on a blog apparently, all about idiosyncracies of the Dutch and their culture. I have to say, most of it rang true to my limited experience. I\’ve either been exposed to many of the things mentioned here, or told about them by my boyfriend and his family. The love of good cheese, the thrifty no-nonsense attitude towards things, the traditions of Sinterklaas (including hot debates about Zwarte Piet- which personally I find offensive, and my boyfriend has no problem with). Chocolate sprinkles on toast, stroopwafles, passion for the color orange (on certain holidays), the prevalence of bicycles, tulip fields and windmills in the home country, the pride in beating back the water. There were a few things in here new to me, especially some Dutch phrases (I haven\’t learned the language much). I\’d never heard of the term gezellig before, which has no direct translation. The Dutch will hurl curses at you with ancient, dreadful diseases. And I burst out laughing at one phrase Ik plak je achter het behang en ga verhuizen which means I\’ll paste you behind the wallpaper and then move away! My boyfriend says yes, his dad used to say that to them when they were annoying (as kids). Cracks me up.

To add a little more insight, each explanation of a bit of culture, diet or language use includes some comments from the original blog. People pointing out how yes, they\’ve run into this or that on travels, Dutch people saying how it is, some disagreeing, most affirmative. Fun and enlightening read.
Rating: 3/5        196 pages, 2013