So I\’m participating in James\’ (supposedly) final TBR Triple Dog Dare. I just forgot to post an announcement because I\’ve been busy. The Dare basically means from now to April first I will only read books off my TBR shelves. With one exception- this short stack of library books I checked out earlier last month. Most of these titles were on my TBR lists, so they count too I think. But the main goal is to actually get through more of those books that have been patiently sitting on my shelves for so long… 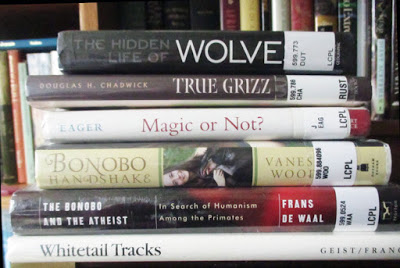 The Wolves of Yellowstone

by Michael Phillips and Douglas Smith

This book is about the program that re-introduced wolves to Yellowstone National Park in 1995. In actuality it began decades earlier; the first voice advocating re-introduction of wolves was raised in 1944 (Aldo Leopold) but it took over fifty years for all the logistics to be worked out. That\’s mostly what this book covers- how the planning was put in place and worked through, difficulties that were overcome and views of success. There\’s very little about the behavior of the actual wolves themselves, especially because the wolves were deliberately given a lot of space- to keep them wild and unaccustomed to human presence. When brought from Canada and placed in acclimation pens they were mainly observed only at a distance. When released their movements were tracked via radio collars, not much else. Thousands of visitors were later delighted to view the wolves engaged in normal behavior. It\’s a very informative read, and I learned a lot about how much work and delicate public relations it took to complete this project, but missed the intimate style of nature writing I usually enjoy. I wasn\’t aware of the red wolf recovery program initiated years earlier in North Carolina before; this program in Yellowstone took notes from how that worked and did things a little differently, they outline the reasons and results well. There are lots of additional side paragraphs written by various people who were involved, usually relating the moment of initial release again. The most eloquent one was near the end of the book, by Renee Askins. I appreciated that all the photographs in the book were taken on site, so they are not all gorgeous and staged. Often a notable moment could only be described in words, as the wolves were too quick or nobody had a camera to record what happened. This re-introduction effort is more than a decade old now, so there\’s lots more up-to-date information out there about what happened to the wolves. I suppose there are other books that have been written since, which can give better insights to the impacts of having wolves back in Yellowstone, simply from the benefit of time. However if you want a behind-the-scenes look at how it was all initially made possible, this is a good resource. 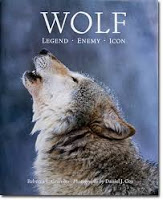 Much like the Barry Lopez book Of Wolves and Men, this large coffee-table style volume provides a lot of solid information about wolves. It covers all the basics- pack structure, habitat needs, hunting strategies of wolves and so on. Mostly it is about how humans and wolves have interacted over the centuries, our perception of them shifting over time. Anciently wolves were revered and admired, many feature in creation stories. Men from hunting cultures tell of copying methods they observed wolves using. When people began keeping livestock, wolves were no longer seen in a positive light but viewed as competition. Even worse, during the Middle Ages when wolves often scavenged the dead left from plagues, famine or warfare, they came to be feared as agents of evil. It\’s taken a long time for our views of wolves to change, but now opinion is swinging around again and wolves are seen by many as noble icons of the wilderness. Interestingly, the author cautions against this relatively new lauding of wolves as well, pointing out that whenever we see the animal through colored lenses, our responses to problems with wolves are skewed. That careful scientific studies should influence our management of wolf populations, not emotional popular opinion. I had never quite read these perceptions explained so clearly before. The book rounds out its discussion of wolves with an overview of the state of wolf populations in different countries, and how re-introduction into many areas is being managed, in particular regarding conflicts with livestock keepers.

A lot of this information wasn\’t exactly new to me, but the clear way in which it was all explained made it a very nice read. Many of the tales recounted- legends, mythology and creation stories from different cultures, were ones I hadn\’t encountered before. The photographs by Daniel J. Cox are beautiful (and I appreciate that the author admits they are all of wolves kept in captivity- pointing out how pictures of captive wolves in superb health can gain admiration and support for their wild counterparts, which are seldom seen and probably less attractive, given how often they suffer from hunger, parasites and other ills). There are also lots of quotes and poems about wolves included in the margins, and images of artifacts depicting them, which adds to the richness of this volume.

I borrowed this one from the public library.

We happily discovered a new volume of Chi’s Sweet Home at the library last week, which prompted my older daughter to re-read the entire series. I glanced through the prior volume to remind myself of the storyline- Chi has finally met her mother, from whom she was separated as a young kitten. Her current family now realizes that her original owners are still looking for her. It seems like a perfect moment for her to be reunited with them, as her current family is imminently moving to France (job relocation). But they still waver over what to do, because Yohei is so dearly attached to Chi. Meanwhile the cats take matters into their own paws, as Chi’s momma is actively seeking a reunion now, and Chi knows the other kittens are her cat-siblings. She is naturally drawn to them, but while spending more time with her kitty family, still remembers and misses Yohei and the others. Where will Chi finally belong?

It’s darn cute like all the other Chi books, but the story here is a lot about moving preparations, family reunion and the internal conflict of finding out you might belong somewhere else. Not so much depiction of cat behavior and kitten antics, which I really enjoyed before. Still, a fun read and a nice ending to the series. i did like the “interview” at the back of the book between the author and one of the cat characters, Blackie. Sad there are no more Chi books, but my daughter and I do want to find and watch the animation of it all.