The Majesty of the Horse 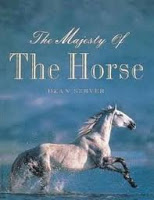 I have two coffee-table books on horses. When I started reading this one, I thought I might decide to keep it in place of the other– it\’s more up-to-date and has nicer quality photographs. But I\’m holding onto both, because it turns out they have different focus. This book was an easier read, the prose is more casual and friendly and it\’s not as dense with information. Tells more about the biology and keeping of horses. It also has an overview of their history with mankind and a snapshot of various breeds, but gives me different details on those. For example, I noticed that the other book said Arabians have different body structure, the number of ribs and vertebrae, that makes them so unique among horses at one point scientists were going to consider them a different species. This book doesn\’t say anything about Arabian skeletons, but points out that Exmoor ponies, one of the oldest breeds, have a different jaw formation than other horses, including an extra molar. Also of note in a historic kind of sense- it tells of the Przewalski\’s horse being extinct in the wild, with captive populations growing in hopes that they would someday be introduced back into the wild. That is now a success story.

Great photographs. If I was still in the habit of making detailed drawings from photos, I\’d definitely source these.

The narrator wakes up alone, in the dark, with a severe head injury and a desperate hunger. She has no idea where she is, what has happened to her, or even her own name. She feeds on animals she catches (craving raw meat) and slowly healing, starts walking out of the forest. Gradually the names of items around her come back, and she starts to make sense of the world. But other things she cannot recall, so when she first meets a human she has no idea of their differences. She stumbles through the world unknowing, and so does the reader along with her.

She is Ina. An ancient species that lives by feeding on human blood, that cannot stand the daylight, that has extra-heightened senses and strength. Vampires, but not exactly the same as those in human folklore (even the characters in the book have misconceptions of the Ina). For example, they can\’t convert humans into their own kind, they are not undead, they raise their young and live in family groups separated by gender. The main character here- who looks like she\’s ten but in Ina years she\’s over fifty- gradually learns about herself as she comes across others of her own kind. It\’s an urgent matter, because almost as soon as she discovers what she is and where her people are, she finds out that someone is very seriously trying to kill them, and maybe they are targeting her in particular. Because it turns out she\’s not quite like the others of her kind. Her skin is darker and she can walk around in the daytime. She barely understands herself what these differences mean, but it\’s very apparent that someone else finds them threatening.

I liked the idea behind this book, and the themes it explores. Especially how it showed the Ina creating symbiotic relationships with the people they fed on- becoming bonded, giving something of value to the humans in return. Their social structure is different from what I expected, and it takes the humans in the story time to adjust to that as well.  Her first human partner is a grown man but oddly enough I didn\’t find it disturbing to read descriptions of this to-all-appearances pre-pubsecent girl being in such a relationship. I suppose because I expected a vampire story to be creepy or disturbing in some way. And this one doesn\’t really have any gross factors. But the other reason might be because I never really felt connected to the characters, it never felt real or engaging. The prose often felt stiff, the descriptions were not of things that interested me, and even though the backstory and explanations came through other characters, it felt like they were just there to do that: lots of people standing around telling each other stuff, in the most deadpan ways. I admit I skipped an entire chapter in the middle because I was loosing interest, then picked up reading again and skimmed more near the end.

Read more about it in the reviews linked to below- I didn\’t even tell you some of the more interesting points because I\’m tired now.