the Journals of May Dodd 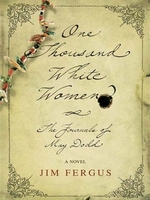 At a peace conference in 1854, a Cheyenne chief asked authorities in the U.S. Army for a gift of one thousand women, to be brides for the warriors of his tribe. Because the Cheyenne have a matrilineal society wherein children belong to their mother\’s tribe, the chief saw this as a perfect means to merge his people into the encroaching white man\’s society. In real life, it never happened. The Cheyenne\’s proposal met with outrage and the peace conference fell apart. But what if it did go through? In an alternative history, this novel thoroughly explores that idea. (I paraphrase here one of the opening paragraphs in the book\’s introduction).

May Dodd is from a family of high society, so her liaison with a man of lower social status is deemed highly inappropriate. When she defies her family by living with the man she loves and having his children out of wedlock, she is forcibly consigned to an insane asylum. It is misery there- but to her surprise one day she is given a chance at freedom: to volunteer in the \”social experiment\” of becoming a wife in the Cheyenne tribe. All the women sent to the plains to join the tribe must go of their own accord and finding a serious lack of volunteers, the government acquires recruits from insane asylums, prisons and \’houses of disrepute\’. Thus the company May keeps on the train West is full of interesting, colorful characters from all walks of life. Her story unfolds alongside that of a dozen other women she keeps in close contact with. It is similar in many ways to the story of another recent book I read- gradual learning of a new culture, seeing the world from the natives\’ point of view, running up inevitably against the white men forcing them off the land (in this case, the tribes had been granted \’forever\’ the land of the Black Hills- until gold was found there and the whites wanted it back).

I prefer perhaps, a more personal narrative that focuses on one person- this one although written in style like a series of journal entries and letters (unsent), tells the story of well a dozen women which makes it feel less intimate. It is really interesting to see how the various characters struggled to adjust to their new life- some of them who really were intent on converting the Cheyenne people to christianity or teaching them to be more like the europeans, failed bitterly and were dissatisfied with their situation. Others like May Dodd who came with a more open mind and were willing to learn from their new companions became content with their new lives.

May finds that the tribal people are more kind and forgiving in some ways than the whites who despise them, but in other ways they act very cruel- especially to enemy tribes. Given the reason why the women went to live there, there is an awful lot of preoccupation with sex- I swear almost every chapter it was discussed in one way or another. But the voice of the main character, telling everything in her journal, sounds very true to its time, so she describes everything with a certain amount of discretion. It never gets terribly distasteful. Just tiresome. There was plenty of material about the toil of everyday life, new skills they had to learn, efforts to find game, friction with enemy tribes and white soldiers, etc. But you can never really forget what the main subject matter is, she brings it up all the time…. Overall, a very interesting story.

PrevPreviousThe Tales of Beedle the Bard
NextWhat a Fish KnowsNext