Life at the Top of the World
by Garry Hamilton 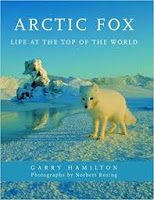 This oversized, beautiful book is all about arctic foxes. Their evolution, distribution, history of encounters with mankind and most of all, how they manage to survive in one of the most hostile environments on earth. They are amazingly adaptable, switching modes from hunter to forager to scavenger depending on the opportunities for food. Well-known for shadowing polar bears for scraps, but some even even hunt seal pups on their own. They can thrive near human settlement- taking shelter in idle construction equipment and feeding at dumps – or in the farthest off-shore reaches of the polar ice, where there appears to be no other life around. Some stay in a closely-defined territory, others roam vast distances. They even have flexible family groups- any combination you can imagine, from a single pair with pups to communal living or even, in one case, a pair that split up (litters can be large in boom times), the male raising half the pups at one den and the female the rest of the young at another. I had no idea that arctic foxes use the same dens year after year, gradually expanding them. Some have over a hundred entrances, extend over more area than a football field, and are judged to be centuries old (reminds me of European badges in that sense). The book relates a lot about other wildlife the foxes interact with or depend on- geese and seabirds, seals, bears, caribou, hares and of course the lemmings. Also much about the landscape and how it changes.

You might think, like me, that the foxes are endearingly cute, but what I came away with most from this book is that they are incredibly tough. Appear to be completely impervious to the cold. The results of a study done by some scientists to test mammals\’ ability to endure cold still boggles my mind when I read the details. As a base for comparison, they tested a number of animals to see at what point they would begin to shiver, using extra energy to maintain body temperature. One of the hardiest tropical mammals, the coati, shivers at 68 degrees. Among arctic animals, lemmings reach this point at 53 degrees and polar bear cubs at 32 degrees. The arctic fox? It didn\’t shiver until the temperature was dropped to -94 degrees and even then only after a full hour of exposure! I am not kidding, that\’s what the book says. At an incredible low of -112 degrees the fox continued to endure, shivering continually, but still maintained its body temperature for a full hour. I think the scientists decided not to push it further. Amazing animals.

Great book. And the photographs by Norbert Rosing are fantastic. Borrowed this one from the public library