Wanted to read a book about a bobcat or lynx, and I don\’t have any that specific. This one is an overview of all wild cats (featuring a lynx on the frontispiece). It has the basics. How they evolved, structures of a cat\’s body, a few pages about domestic cats. Then it dives into the wild cats. All the small cats- ocelots, servals and bobcats to the flat-headed cat, kodkod and jaguarundi- get just a few paragraphs, with the exception of the puma that has a several pages with more details on behavior. Most of the cats it\’s very minimal information- distribution range, how many young in a litter, size and markings, what they eat. Beyond that, very little is consistent. For example some wild cats the book told me the gestation period, others there\’s no info on that. Maybe because it wasn\’t known? It is a rather old book. Names thirty-six feline species whereas the count I found online goes up to forty, depending on if some are actually considered subspecies or not. (Here\’s the lynx) 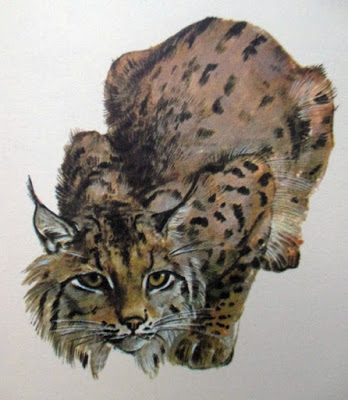 The last part of the book has the big cats: tiger, lion, leopard, jaguar, snow leopard and cheetah. This is more interesting; it goes into a lot more details about behavior and especially interactions with man. I did learn some surprising facts, such as that snow leopards have been found to make a den in vulture nests. Tigers will eat carrion or remains of their prey that have partly spoiled in the heat, if they are hungry enough. The book does have some old ideas, though- such as that cats are mostly driven by unthinking instinct, and will react the same way to a situation every time. It describes how lion-tamers are able to intimidate the big cats in order to display them for the public, and matter-of-factly relates how tigers, leopards and lions were hunted for sport (also with some notes about man-killers). Then there\’s this odd tidbit:

Lion hunting as a sport became really popular at the beginning of the twentieth century. This was the period when a man disappointed in love was supposed- if he could afford it- to redirect his resentment toward the fauna of Africa.

Really?  Men who felt jilted used to go off and blast animals to make themselves feel better? I\’m sure some of them did, but I never realized it was a socially accepted thing to do so. I had more of the impression men went on safari hunting trips to show off, bag trophies, or just enjoy their marksmanship skill. Anybody heard this before? On a smaller note, I did find it odd that the author described the base coat color of tigers and leopards as brown, but said that cheetahs are yellow-tawny. Hm, I\’ve always thought of tigers as basically orange, and leopards as yellowish.

Overall, an interesting little book if you\’re into cats, or just want to gather some facts on them. However a lot of the unknowns when this was printed are spelled out elsewhere now, and most kids would of course just look stuff up online anyway. I do really like the illustrations by Peter Warner (they look like gouache paintings). Here\’s some samples- ocelot: 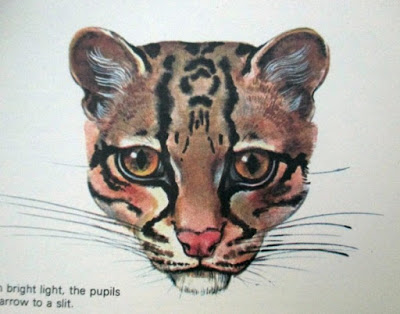 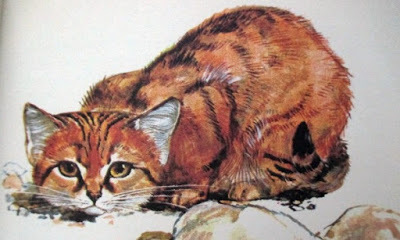 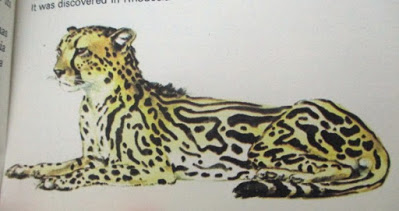 Nevertheless, if I ever have to cull my library because of space issues, I\’m afraid this one will probably go. I have other books on wild cats that are more comprehensive and more current.

PrevPreviousFlight of the White Wolf
NextThe Adventures of Peter CottontailNext