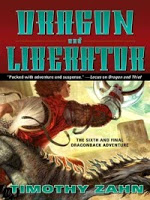 Sorry book, I skimmed most of you. The more convoluted the plot got, with suspicions abounding about who knows what about whom, who is infiltrating or conniving or scheming about what- well, I just lost interest. Kayna and Taneem stow away inside a bomb-rigged safe to get aboard the enemy spaceship; Jack and Draycos wind up in jail, then get sprung and for the bulk of the story are hiding on another ship in a gap between the hull and the inner wall- each party spying on the crew and those in charge, sowing unrest in the thin alliance their enemies hold, and attempting to sabotage the ultimate weapon. There’s lots of sneaking through air ducts, and using sophisticated tools to eavesdrop. Kayna isn’t who we thought she was (no surprise) and Jack finds out a few more obscure secrets about his past. Taneem realizes she can slide onto other people’s skin without them even being aware (the guy was asleep) which was kind of weird, but not really explored much. In the end more about the K’da background and their bond with humans came to light, which is really why I pushed through this. My main curiosity was about the ongoing development of the K’da/human relationship, and the interactions between the four main characters- but this book was much more about the tension and excitement of space battle. Not really for me. However fans of the author like how this wrapped up the series with drama and speed, so there you are.