Sequel to Dragon and Thief. Not quite as good as the first book was for me, but that could be due to the focus on battles and such. Jack and Draycos need to identify who had attacked the dragon\’s species, without revealing the fact that Draycos survived. They figure they can get this information from the database of mercenary companies that keep tabs on all their enemies and competitors. So Jack enlists in a mercenary unit that regularly takes children (base age is fourteen, though quite a few lie and join up younger). Supposedly they do this because their families are desperate for the payout money, although the contracts of course have fine print that often lets the company weasel out of paying- but that\’s beside the point. Jack goes through a ten-day boot camp, trying to fit in but his dragon \’tattoo\’ gets noticed and he has to pretend to show it off, not hide it. Which makes keeping Drayco\’s existence secret a bit more tricky. Meanwhile they have to figure out how to access the computers, and get sent to their first battle assignment before accomplishing that. A place where they are not welcome, and after a short while Jack realizes they\’re not actually there to defend the civilians as he was told. The fighting in this book is not hard to read- it\’s mostly bombs, tactical evasion, spying, getting taken captive and interrogated, and so on. Draycos takes matters into his own claws a few times, but even in that case the descriptions are light on gore (and he prefers not to kill unless it\’s necessary anyways).

More interesting is the continually developing relationship between Draycos and his host- he\’s still trying to instill his code of honor and ethics in the boy, while Jack can\’t help falling back on the conman mindset he was taught. There\’s also an intriguing character Alison Kayna, who seems a lot more experienced than the other new recruits. Suspicion goes both ways between her and Jack- they each wonder what the other is up to, but avoid close questioning or striking up a friendship. The story closes with Kayna zeroing in on the fact that Jack is definitely involved in something- which probably leads right into the next book in the series.
I kind of like the fact that something I at first assumed was a weak point in the plot- Jack sabotaging a natural resource that was the crux of the whole conflict the mercenaries were there for with an item that could withstand the blast- actually turned out to be something he did on purpose. Seems like his desire to be a better person- turning away from his shady upbringing- and Drayco\’s strong sense of chivalry are sinking into each other. There was also a really cool scene where Draycos and Jack\’s uncle spoke in code using poetry- they basically took turns quoting a lengthy poem, with critical information given in lines were deliberately omitted. (However, the dragon\’s line-by-line explanation of that to Jack later on was a bit tedious).
This one has my favorite cover of the series. I just happen to like the tattoo detail and how Drayco\’s tail is snapping out of Jack\’s arm (even though there was never a scene where the dragon showed himself while Kayna was nearby). 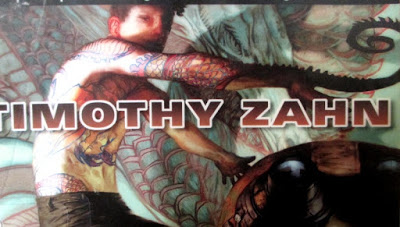