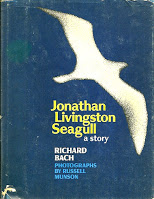 On the heels of Argen the Gull I felt like revisiting Jonathan Livingston Seagull, especially since I knew I could read it in one sitting. It was a brief but lovely sitting. I had forgotten how very short it is (half the book is pictures of gulls, very nice pictures too although many are blurred to the point of abstraction). I must\’ve read this five or six times somewhere between ten years old and college age, I was so taken by it. Younger me loved this book. Older me- well, I rolled my eyes a few times, then shrugged and just enjoyed it for what it is.

It\’s an allegory on religion or philosophy- some parts feel very much like Jonathan Seagull is supposed to be a messiah figure, other parts he\’s suddenly transcending space and time, talking of previous lives that led into this one, so- reincarnation? But the overall message is simply: be true to yourself. Strive for what you love to do best, and be kind while you\’re at it. At least, that\’s what I got. On the surface, it\’s a story about a seagull who wants to fly higher and faster, push himself beyond the limits. When the others are searching for food, he\’s out blazing around in steep dives over a hundred miles an hour (how a gull clocks his own speed is beyond me, but hey, one of the things you just have to shrug off). His antics get him banned from the flock, who have rules of conduct and a leader (not at all how gulls actually live, shrug again). Jonathan Seagull is shunned for being different. He flies away to perfect his aerial stunts by himself, and then finds other seagulls, though few in number, who also love flying just for the sake of flying. He joyfully strives to learn more with them. Then one day decides to go back to the old flock and see if there\’s anyone else stuck where he had been so long ago. He thinks of how much faster he would have progressed, if he\’d had a mentor then. And starts teaching some eager young gulls his specialized flying skills, right in front of the disbelieving flock . . .
Some of the far-out-there ideas in this book: death is just a shift to a different level of consciousness. You can transcend the limits of your body simply by putting your mind to it. Seagulls can communicate telepathically and instantly travel through space and time! But I still really like a lot of the rest of it. Bits like this:

His vows of a moment before were forgotten, swept away… Yet he felt guiltless, breaking the promises he had made himself. Such promises are only for the gulls that accept the ordinary. One who has touched excellence in his learning has no need of that kind of promise.
If our friendship depends on things like space and time, then when we finally overcome space and time, we\’ve destroyed our own brotherhood! But overcome space, and all we have left is Here. Overcome time, and all we have left is Now. And in the middle of Here and Now, don\’t you think that we might see each other once or twice?
You will begin to touch heaven, Jonathan, in the moment that you touch perfect speed. And that isn\’t flying a thousand miles an hour, or a million, or flying at the speed of light. Because any number is a limit, and perfection doesn\’t have limits. Perfect speed- is being there. [this is where he learned to move from one place to the next in a blink]

Heavily colored with nostalgia for me, of course. If today was the first time I were reading this, well I don\’t know what I\’d think. If you\’ve read the book, go look at the reviews on LibraryThing, you have to read the one that posits Jonathan Livingston Seagull being on Oprah. It\’s absolutely hilarious. I laughed so hard.
Rating: 4/5            93 pages, 1970
More opinions:
Vulpes Libris
Fifty Books Project