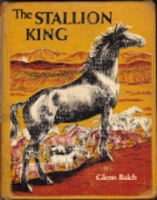 I\’m in the middle of a longer book but needed an easy read for a hot bath, and this was it. Unfortunately I found out pretty quick that like Indian Paint, this book is an abridged version of the original (titled Wild Horse). Wasn\’t quite as \”dumbed down\” so I was able to enjoy it somewhat; however it still doesn\’t really sound like the author\’s voice to me and will only stay on my shelf until I find a copy of Wild Horse.

It\’s about two kids who have been admiring a wild black stallion that lives near their father\’s cattle ranch. The father doesn\’t see much use in wild horses so he doesn\’t mind when men come to run the wild horses, intending to sell whatever they catch for rodeo broncos or to a factory that makes chicken feed. The kids are appalled that the wild stallion they call King might meet such a fate. The boy determines to go out and catch the wild horse himself, and his sister helps by bringing supplies and fresh horses. It is a long hard job which they mainly do by following the stallion in relays until he\’s worn out. Most of this story felt really flat and bland to me- the dialog and descriptions- but that is probably due to it being \”revised\”. The final chapters were more interesting, after the horse is caught. The ranch hand is from South America.  He uses a bola for the capture instead of a lariat and his methods for getting the wild horse to accept some basic tack were also interesting. I liked that the horse\’s behavior and responses were very realistic. Eventually they teach the horse that it can\’t get away from a rope and are riding it (although it\’s not really controllable). The kids are so excited to have the wild stallion, but also dismayed that it seems the horse will never really accept confinement or guidance from a rider- having lived so many years in the wild and being set in his ways. But if they let him go again, he\’s at risk of being caught by others and sold to rodeo or slaughterhouse. The way they solve this problem is neatly done and honestly I didn\’t expect it at all, even though it was hinted at in the opening scene, I missed it.
Definitely think I\’d like the original version of this story. Happily I found a website that lists Glenn Balch\’s books and notes which ones are revised reprints, so maybe I can avoid this mistake again.
Rating: 2/5            118 pages, 1960