The Mind of An Ape

by David and Ann James Premack 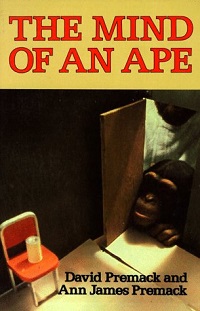 Language studies done with chimpanzees in the sixties. It’s very specific and detailed about how the studies were performed, what they aimed to find out, and how they drew their conclusions- namely that while apes can learn to communicate to a limited degree, they will never actually use language as we know it- they can’t make proper sentences or use abstractions. By the end I found this book really interesting, but I admit it was hard to get into and I almost ditched it fifty pages in after mostly skimming. The writing can be very dry. What’s intriguing is that the scientists did not teach these chimpanzees sign language, or to recognize written words, but instead totally arbitrary symbols for words and objects. The chimps learned to use the symbols to label familiar things like apple, pencil, cup- and individuals- themselves and people who tested them. They learned symbols for colors and certain actions and prepositions- give, cut, on, etc. They were tested to see if they could follow directions, identify objects, make comparisons between objects, draw conclusions about actions performed on objects, solve problems, and transfer learned information to new situations. Children at different ages were also presented with the same kind of tests to see how they did compared to the chimps. What’s really fascinating is to see where the chimps showed their abilities and understanding outside of the testing parameters, and how they preformed on double-blind tests. They also gave chimps that had not had any language training with symbols some of the same tests, and it was obvious the untrained chimps didn’t have the same kind of understanding about cause-and-effect or comparisons. What I found really amusing was when they gave a human one of the tests- he had been part of the double-blind study- giving the chimp questions without himself knowing what the symbols represented (so he couldn’t inadvertently cue the chimp with his body language). Later they tested the man, to see if he’d picked up what any of the symbols meant by watching how the chimp used them. (He figured out many of them, but not all). There’s also comparison of the chimp studies with those done using rats and pigeons. Also comparing what they learned about ape intelligence to how bees convey information with their waggle dance.

The cover image is from part of the study where they tried to teach the chimps abstraction using maps- if they showed the chimp a picture or video of a room it was familiar with, and hidden food, would the chimp find the food when taken to the real room? nope. So then they made a tiny model of the room, showed the chimp hidden food in the model, and took it to the real room. It still failed to find the food. Only when the model was actual size compared to the real room, did the chimp immediately move to the hidden food. Then they worked backwards, using smaller and smaller models and then finally flat representations on paper, and now the chimp was able to transfer the information and find the hidden reward- but not, interestingly, if they rotated the map.

I feel like I should read this again someday to understand it all better, particularly as I didn’t really grasp some of the conclusions but not sure if I can see where there might be a flaw in deducing what the tests showed. For sure later language and intelligence studies with chimps and gorillas has already done this.