the Life and the Legend 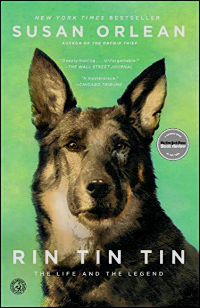 In World War I, a young soldier named Lee Duncan found a litter of puppies in a ruined kennel on a battlefield in France. Lee managed to bring two of the puppies home, and one of them grew up to become the famed movie-star dog Rin Tin Tin. I had heard the name before, but knew nothing else about him. This book depicts pretty clearly what was so remarkable about the dog and how he became so famous. Coming from a rather lonely childhood, Lee bonded closely with Rin Tin Tin and trained him to follow detailed commands. The author does a great job at noting how different society and the role of dogs in America was back then- most dogs were working animals, didn’t live in the house, and were not trained- not even to the basic “sit”, “come” or “heel”. Rin Tin Tin was not only well-trained but had a very expressive face, this combined with his intelligence and aptitude for physical feats- leaping long distances, clearing obstacles, pulling items, etc- made him a star in silent films where his roles were central, just as much as the human actors. Apparently he embodied the values of bravery and loyalty to the public, caused german shepherd dogs to become wildly popular, and even led to the obedience training of household dogs to become common. Lee was enraptured with his dog and worked to breed Rin Tin Tin, selling the puppies then selecting and training a suitable inheritor for the dog’s role. Because of course the dog got old and eventually died, but one of his offspring took his place.

A lot of the book is about the show business, how the dog’s popularity waxed and waned, how it went from being one particular famed dog to a famous character portrayed by many dogs, about the people who took care of him, trained him, wrote scripts for him, and fought over rights to his image. How the character portrayal and management of dogs acting for Rin Tin Tin diverged from the actual canine descendants that were bred. The clash between Rin Tin Tin and Lassie for popularity, and how Rin Tin Tin the movie dog differed from the TV show. About people who collected Rin Tin Tin memorabilia, or longed for one of the german shepherds descended from him, and on and on. At times I thought I would get tired of this book because it was so much about the people and circumstances surrounding the dog, more than Rin Tin Tin himself. But in all it was pretty darn interesting, especially the cultural aspects, I learned things about American history I didn’t know before, especially in regards to the filmmaking industry, dog breed clubs and shows.

After reading the book I looked for some clips of Rin Tin Tin online- not the 1950’s TV show (which is easy to find) but the older black-and-white footage with the original dog. I found one, and even though the acting seemed a bit melodramatic I could see how this dog awed the public. Especially if you remember that the original dog did all the acting- he didn’t have any stunt doubles, there were no special effects. That was him actually running and leaping across a gap, or picking up a rope to guide a horse to lift a car off a man after an accident. Would be nice to watch one of the old silent feature-length films, if I could find any. Just for curiosity sake.

more opinions:
Vulpes Libris
the Literary Lioness
anyone else?