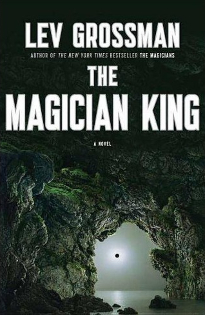 Those who said this was better than the first book, they were right. I’m glad I made the effort to read it, far more interesting, even if I still didn’t like Quentin or find him sympathetic. Julia was far more interesting, but had her own problems, man did she ever. I don’t want to say too much that would spoil this for other readers- but suffice to say, Quentin and his friends have become kings and queens in the magical land Fillory- very much like the four Pevensie kids in Narnia. Also very reminiscent of The Dawn Treader was the quest Quentin and Julia ended up on, that took up much of this book. A quest to save the world of Fillory, though at first they don’t know what exactly they’re trying to save, or how the pieces of the urgent story they keep hearing, fit together. It was rather delightful, how everything did all come together in the end. Also horrifying, in some ways. Lots of very not-pretty stuff happens in this book. People get hurt, murdered, violated, sometimes for no good reason at all. Through it all Quentin is pretty desperate to find something exciting and grand just like he did before he ever got to Fillory- being a king now in a castle with every luxury at his fingertips isn’t enough for him, he has to make up this quest and go on an adventure only then it turns out to be a real quest with very real consequences and dire stakes. He finds out what’s behind some legends or fairy tales of Fillory, how twisted history gets through the ages, even in this magic land. He finds out what his friends are made of, and himself- though he doesn’t change a whole lot even then. He’s still himself- I read in someone else’s review that it seemed one of the author’s main points was to show that if magic were real, it wouldn’t change people. It wouldn’t make people better, or happy. Though it would certainly corrupt many of them!

I think the best part of this book was all the backstory on Julia, though it kind of dragged on me how the interspersed chapters telling what she’d been doing while Quentin was at magic school in the earlier books, were so out-of-step timewise with the present storyline. However at the end I instantly saw why it was done that way- because it kept the reader in the dark about how some things were relevant to others- very much how Quentin was in the dark all this time, about what he was really doing, and why. It all falls together for the reader, about the same time that Quentin has a big realization. Clever, that.

Oh, and there’s dragons in this one. Dragons that live deep in rivers, each one in his own and hardly ever seen. Really wish there’d been more about the dragons, or at least a little more description of them! They had a key part but their showing was so brief. Perhaps in the third book.

More opinions: The Guilded Earlobe
anyone else?