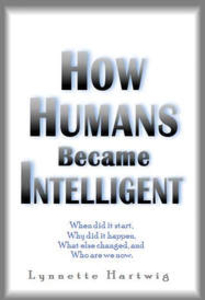 The presumed subtitle of this book is: When did it start, Why did it happen, What else changed, and Who we are now. (I say “presumed” because it’s printed on the front cover and title page, but not part of the LCC line on the copyright page). This book is about evolution, specifically looking at why humans of all living things on Earth are the only ones to have developed language, intelligence and culture to excess. Excess, because she points out quite clearly that being smart isn’t necessary for success- thousands of creatures get by just fine on instinct alone, and have done so for eons. In fact, lots of them do many things far better than we ever could. The author posits that intelligence (and another characteristic I’ll mention in a second) is really a desperate measure evolution threw out there to save a species from dire straits in the past- and in our case it worked all too well. First she explains how genetic traits are held in reserve in the genome of species- which I already partly understood from having read The Ancestor’s Tale. While that book was really dense on details and explanations, this one is rather light in that regard- I was often left trying to connect the dots myself or wondering what got left out, or wishing for more examples, something. I suppose, like me, you’ve often heard the theory that long-ago ancestors of humans descended from trees to live on the savannah. This book says nope. Points out all the physical features of humans that don’t align with anything savannah animals use to survive- be it predator, prey or scavenger- and instead strongly suggests that humans evolved to live on the waterside. More like otters in that regard. And that we did so for thousands and thousands of years before changing. Much later drastic environmental changes pushed early hominids out into savannah habitat. Then a freak rise of intelligence enabled survival even though humans were so weak in comparison to other animals.

I found that all fascinating, and the arguments actually made sense to me. It’s the end part of the book that got me scratching my head. The idea that the one main feature setting humans apart from other animals is not our intelligence per se, or our ability to use language and tools- but our intense drive to make and build things, hoard things, look to the future. How negatively that can impact everything. Again the explanation makes sense, we do seem to all suffer from an inner need to have things, and even if this isn’t physical objects, to secure our future- to save up money for our children, or in other ways make sure we leave a legacy. We don’t live in the moment like animals do, just securing what we need now and satisfied with that. It might well be not only our undoing, but that of the entire planet and all other living things. Dark thoughts.

But then there’s the author’s odd rant about how inaccurate weather forecasting is. Or the pages and pages saying men loose their ability to think individually in groups, whereas women will always question the leader. Really? I am not sure that’s a gender character trait, surprised how the author is strongly insistent about it.

Then there’s the um, quality control issues. The book is pretty much self-published. I looked up the publishing company- it lists just under a dozen books, and ten of them are by this author. The book only has a few typos- and things I can easily overlook- a missing space, or a quotation mark where it doesn’t belong. But it has two pages pasted in (different paper color and texture)- one where it was apparently left out, for the foreword (which amused me because it felt like it was added as an afterthought and the first line of it is I hate Forewords and Introductions in books. I’ve read less than 5% of them. The other is pasted in about halfway through, not adding a missing page but rephrasing it including putting what was a footnote from another page into the text body. It doesn’t merge seamlessly with the rest of the text, it’s a rewritten segment and really stalled this reader trying to piece together how it was supposed to flow.

I did really appreciate there’s an index, but the references were almost all website articles and online videos. I think there were two or three articles from periodicals listed, and not a single book. Why do I expect that a book is more solid reference material than a documentary film or online article? Not sure, but I do.

Sigh. I have a friend who is a writer, and partnered with a writer (one is a poet/memoirist and the other writes screenplays) so I’ve heard a lot about how very difficult it is to get published. It’s such hard work to write a book, and a ton more work to promote it. But so often the quality falters when it’s self-published. I bought this book at a local-author event my public library hosted several years ago. I used to go every year with my writer friend. Came away too many times disappointed. Most of the books were of popular interests but not so much for me- lots of YA dystopian fiction and paranormal romance, for example. I only found a few I thought I’d like to read, and then thumbing through to read a sample, was not keen on the writing style. Took a chance on this one and still came away feeling let down. However I’m keeping it because the ideas presented on human evolution make so much sense to me. Great ideas, just would like to see more proof.