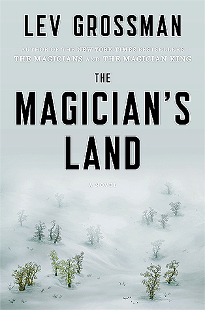 Final in this magician series. I don’t quite know how I feel about it. The characters were more interesting- they’ve matured somewhat, and Quentin can understand things he would have only seethed about before (though he can’t always solve his problems, still). In this third book, he’s been kicked out of the magical land Fillory, and ends up back at the secret magician’s school Brakebills, where he asks for a teaching position. Very well done, showing how he viewed the other professors and the whole institution differently as an adult, than from when he was a student himself. Also how his relationship with his parents shifted, although I still didn’t get any feeling of them as people (although that made sense, seeing how Quentin was so estranged from them himself). As before, the storyline jumps around, sometimes from the perspective of his friends still in Fillory- who continue ruling as kings and queens but then go on an urgent quest when they discover something is seriously ailing the magical land. How perfectly the two storylines, and many incidents and details from the prior books, weave together into an surprising ending. Despite how parts of the book didn’t work for me, it almost made me want to read the whole series again from the beginning, to pick up things I must have missed the first time around.

What didn’t work for me: the chunk of pages in the middle where Quentin is contacted by a group hiring magicians to steal a magical object (which it turns out they don’t have a right to): it becomes this elaborate, dangerous, deceit-riddled heist. My eyes glazed over. Fight scenes and intrigue don’t interest me much, sigh. I was about ready to toss it and read something else, but I skimmed through and got to the part where they find an old journal, the firsthand account of a Chatwin boy- one of the first who went to Fillory, part of the untold story-within-a-story. Man, that was fascinating. All the stuff about the Fillory books and how they affected these characters, made me so wish that was a real series, itself. I also loved all the parts about the magical library, and just the book love in general that these characters had in their crazy quest. Because it winds up to be a frantic effort to save Fillory. Quentin does things I wouldn’t have expected. In fact, the whole series does. It continued to pull surprises on me, up until the end- turns and connections I never saw coming. Though I was disappointed about the dragons- they play a major role but it’s all offstage! I was expecting a huge major battle in the end, but the dragons solved it for everybody (at huge cost), and the reader just hears about it secondhand.

Oh, and Alice returns. Quentin encounters her as a niffin, (a ghost/demon thing she turned into when overtaxed her magic to save the others earlier in the series) and it becomes his mission to save her, to bring her back. This was very interesting and again, not at all how I expected it to turn out. I liked that Alice was angry with Quentin for trying to “save” her- who was he to assume she wanted to be human again? but their reconciliation later on seemed way too easy and quick. No real explanation of that. If they had really smoothed things over, I think it would have taken much longer, and with far more rocky moments.

Well, a lot to think about. Worth reading overall, even if the series had some parts that annoyed or bored me, tempting me to turn the book in early. I’d like to re-read it all several years from now, see what I think when I’m not so focused on following the basic chain of events.