The House of the Deer 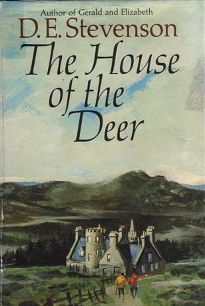 I’m not familiar with this author, and I’m afraid this book I picked up at random somewhere is probably not her best work- I think it was the last one she wrote. It’s sequel to Gerald and Elizabeth, and since I haven’t read that one, it was slow going at first because I didn’t have a previously built up interest in the characters. Gerald is the main one in this story- a young man who works in an important shipyard and has been helping with security measures there. He goes off on vacation to the highlands of Scotland, where he stays in a curious old hunting lodge with the landed family and some other guests. They are going out on hunts to cull the local deer herd, which has grown larger than the land can support. Gerald is encouraged to go along and given opportunities to make a good shot but he really doesn’t want to shoot any deer, which nobody else understands. He shares stories of having shot lions in Africa, from necessity, and how unpleasant he found that- even while the younger boys listening are in awe at his “bravery” and want to hear all about how “fierce” the lion was (it was starving). Gerald is interested seeing how the deer are managed, but later he’d rather spend time at the lodge, being infatuated with the daughter of the household, Phil. He’s a very nice, mild-mannered and reasonable man, so doesn’t get along well with one of the guests Oliver, who’s a tedious braggart. Creates a nice bit of conflict, though never on Gerald’s part.

Honestly the first part of this book was very slow for me- I had little interest and was about to toss it as a DNF- then the deer stalking began and I found it a lot more interesting. I think that’s the best part of the whole thing, although a lot of readers (who are D.E Stevenson fans) feel opposite. Unfortunately the end kind of dives into a different kind of story- a young man in the hunting party gets accosted by strangers in a fog, then Gerald himself is kidnapped, apparently by members of a gang who want information on security measures at the shipyard. The whole rest of the book is about them trying to rescue Gerald, deal with the gang, and solve the little mystery of who attacked the younger man. There’s actually a scene where everyone is sitting around a room discussing the possibilities and some of them accuse each other! Then at the very end, it suddenly turns into a love story- the beautiful daughter Phil admitting that she likes Gerald in that way after all- and marriages are arranged (there’s another couple with a suddenly admitted love interest). Rather too hasty in my opinion. But then, I get the sense that as a whole, this type of book wasn’t written for me.

I was mostly disappointed that the stalkers never got the one “hummel” deer they were particularly trying to cull- it was a male deer without antlers and they didn’t want it passing on its faulty traits. There was a scene where they almost got it, but something startled the deer and it ran straight at the hidden men in a fright, getting too close so fast they were taken aback and didn’t shoot. I really kept expecting a final scene where this hummel would leap out and someone would take the chance to shoot it, maybe it would even trample the gang members into the heather, wouldn’t that be fitting, and it seemed the kind of story where that might happen- but it didn’t.

I did like the few bookish references- when Gerald is injured and has to stay abed, Phil brings him Jane Austen books from the local library. And when Gerald tells his story of lion-hunting, he mentions that he had referred to an old book which had belong to his father, it was The Man-Eaters of Tsavo by Colonel J.H. Patterson. He had not read it for years, but it had fascinated him when he was a boy. That’s one on my own TBR, if I ever find a copy!