Cathedral of the Wild 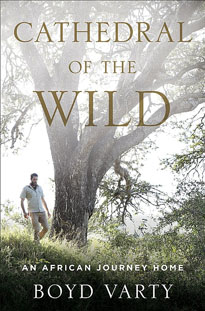 Author tells of growing up in South Africa, on a wildlife reserve his family established. The land was originally bought from farmers that degraded it, and earlier generations had then used it for hunting. Boyd’s parents wanted to restore the land to bring back wildlife and run tourist safaris. At the time this was a new idea and they struggled to make it work. His heartfelt memoir tells what it was like growing up in such a place- surrounded by wildlife, baboons and warthogs on the lawn, going on drives with his crazy uncle to make wildlife films, learning tracking skills from local men and frequently running into lions, leopards, elephants, etc. Many narrow escapes (on rivers, in small aircraft, deadly snakes, crocodiles, you name it) and a healthy respect for the wild animals. Humorous stories about their visitors- lots of ordinary people and occasionally someone famous, once even member of royalty. He met Nelson Mandela as a young boy (and didn’t realize the significance of that until much later). Tells about his family, his stays at boarding school (frustrating as so completely different from life in the bush) and above all, how the lessons he learned from the land stood him well later on: to stay calm in a dangerous situation, to always have an escape route in mind, to study things carefully and make calculated decisions. Later he tells of grief and terror his family went through- especially an incident when they lived in Johannesburg, had their lives threatened and sense of security violated. It took him years to get over the trauma of that night, and he travelled widely across the world seeking out gurus in India, a shaman, various kinds of healers, and finally a Navajo sweat lodge in Arizona (often honestly skeptical about how these things would help). In the end, he returned home to his family’s reserve in Africa, finding his place where he had always belonged, settling the fear and stress out of his mind. The final chapters of the book explore spirituality quite a bit, but never veer far from the solace he felt rooted in nature.

I enjoyed this book so much. Incredible stories, amazing surroundings, riveting wild animals, a quirky family. Above all one young man’s search for meaning and sense of self, when tragedy and violence strain his equilibrium. It was at turns exciting, funny, and very thoughtful. He mentions meeting Peter Beard! and of differences of opinion with a nearby reserve that held elephants (I felt sure I’d read a book about Kruger National Park but couldn’t place it). Near the end he also tells of meeting Martha Beck, which took me completely by surprise. I was reminded of many other books I’ve read about Africa, or wildlife conservation: The Elephant Whisperer by Lawrence Anthony, Born Wild by Tony Fitzjohn, Don’t Lets Go to the Dogs Tonight by Alexandra Fuller.

I do have to note, one part made me feel put off- when he mentions going to Australia and how he’d been reading this book with his teacher and his sister. And how they absorbed the message of “the Aboriginal Australians’ plea to save the planet.” Well, I admired that book’s idea of harmony with nature too, but was upset to discover it was actually fiction. Dismayed to see it praised here. I assume he didn’t know.