The Woman Who Redefined Man 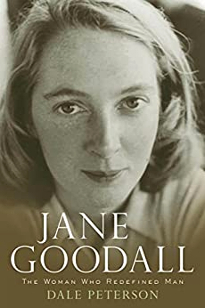 I just finished this hefty, very thorough biography on Dr. Jane Goodall. It could have felt like a burdensome read, except that a) I recently bashed my toe on the concrete garden edging and so wanted to keep it propped up for several days which gave me a nice excuse to put in some good, long reading hours. And b) I’ve admired Dr. Goodall for a very long time, so reading this was for the most part delightful- a lot of it was so familiar to me, but with new details and background info I’d had no idea about. Decades ago, as a teenager, I was idly browsing shelves in a thrift store and saw a paperback titled In the Shadow of Man. I picked it up thinking it must be a thriller or spy novel! What was my delight to read, for the first time ever in my life, narrative nonfiction- a popular science book about field studies on wild animals. I didn’t know such a thing existed before. It is by far still my favorite kind of book to read. I was fascinated and awed by what this amazing woman had done with her life, and the things she discovered about our closest living relative, chimpanzees.

The biography brings that all back to me- I’ve read a few other of Jane Goodall’s books since, but not nearly as much as I want to! In case you don’t know, she was born in England, grew up in a nice family, always had an interest in animals from a young age. There’s a much-repeated story where she went missing as a young child and there was a frantic search going on when she emerged, hours later, from the hen house- where she’d been sitting in the dark patiently waiting to see how a chicken laid an egg. This book tells a lot about her years growing up, her early secretarial jobs, and the many young men who tried to gain her favor. It tells how she met the famed anthropologist Louis Leakey, who wanted someone to study great apes in the wild, thinking they would give us glimpses into how early man had lived and behaved. He thought women would be better at this than men, having more focus and being less threatening than men. I’d had the impression that Jane Goodall went very suddenly to Gombe to study the chimpanzees, but in reality she worked for Leakey several years while he sought funding for the project. When she finally got there, she spent months trying to habituate the chimpanzees to her presence, and it finally paid off. She was able to observe them closely, doing all their normal everyday activities, and made the shocking (for that time) discoveries that chimpanzees make and use rudimentary tools, and hunt and eat meat on occasion. Her methods were unheard of at the time- and her habit of giving the animals names and describing their behavior in a manner anyone could understand, made her material accessible to the public. In fact, while Jane Goodall was struggling to learn to report her findings in a way the scientific world would take seriously, her main supporter National Geographic, was encouraging her to write in a more storytelling manner to engage the public audience.

There’s a lot of details in this book about supporting people in Jane Goodall’s life- her family and friends, Louis Leakey, the Nat Geo photographer Hugo van Lawick who became her first husband, the many many people who came and went from Gombe as the project grew. Eventually Jane Goodall had assistants trained to also follow the chimpanzees and make observations, resulting in one of the longest sustained study on a group of animals in the wild, ever. Many graduate students came to Gombe to do their own research projects on different aspects of chimpanzee behavior. Jane Goodall found herself as the years went on doing more of the administrative work and less of the studies herself. She travelled all over the world giving lectures and attending conferences (I think in one chapter the author used the word peripatetic three times in a half dozen pages!) at first to share her findings about chimpanzees, then to advocate protecting them and preserving the wild habitat. Near the end of the book her focus shifted again to urge world peace, to encourage young people in finding ways to better the world around them, and to improve the lives of chimpanzees and other simian species that live in zoos or were used in research. Some of the saddest passages in the book describe when she visited research facilities or saw chimps mistreated in captivity. As far as I know, Dr. Goodall is still working tirelessly to further the causes she believes in so deeply.

There’s so much in this book I have barely touched on any of it. Her work at Cambridge University to earn a Ph.D. (so she would have credentials to get published in scientific circles) even though she hadn’t done any undergraduate work. An early job she had at the London Zoo assisting the filmmaker who produced a popular television show about wildlife. Her mother Vanne wrote a romantic fiction book set in a rain forest! How her son Hugo nicknamed Grub, grew up more or less in the research camp. The many mishaps, frustrations and dangerous moments during fieldwork in Africa- especially when political situations made it unsafe. Glimpses into the lives of the chimpanzees. Why she and Hugo didn’t write the sequel to Innocent Killers (another book I loved- it was about hyenas, jackals and wild dogs in the Serengeti. The sequel was supposed to be on studies of leopards, lions and cheetahs). Her second marriage to Derek Bryceson (and how both marriages eventually ended in divorce). The many many famous people she has met. Her lively, humorous and energetic writing style- as numerous passages are quoted from letters, diaries and field journals. Normally I might feel distracted and annoyed at so much being presented in a biography about other people- Louis Leakey’s childhood for example- but in this case I was already familiar enough with the main person that I found all the secondary stories interesting and insightful. Even the brief ones about people who cooked in her camp, or worked as her secretaries, or helped her care for her pets (small wild animals when she was younger, lots of different dogs later on).

Maybe this is rambling, and it sure is a lot, but that’s my grand impression of this long and detailed book on the life of an awe-inspiring person. Sure did revive my desire to read her other books on chimpanzees, conservation work, etc. And the book her mother wrote might be interesting, too.