The Cat I Never Named

A True Story of Love, War and Survival 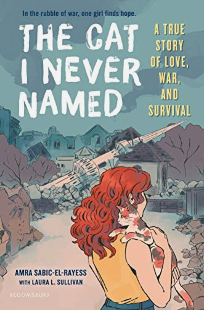 Amra was a teenager living in Bihać when the Bosnian war began. She first noticed things were shifting when a close friend refused to speak to her- because Amra’s family was ethnically Muslim. Though they didn’t follow religious practices they were soon persecuted along with all the other Muslims in her city. It was under seige for years- bombs fell regularly, innocent people were shot in the street by snipers, and worse. Just a few pages in you get a sense of what reading this is going to be like- the author doesn’t hesitate to tell you the horrible things soldiers said to a young girl, her fears of being captured, of rape or torture. Her family lived in constant apprehension and suffering, as electricity was cut off, food in short supply, and soon little or no medical care available. She often thought they would simply not survive. Sometimes they had to do difficult things, to stay alive. Other times they stood their ground refusing to give in to inhumanity and maintain some integrity.

But her story is also one of hope, as they pulled together with neighbors and family members to find ways to keep going- growing vegetables in abandoned lots, bartering for goods, tutoring younger children who had no teachers, assisting in the war effort when they could. It was traumatic- there were days she couldn’t get out of bed, and not just from lack of energy because they were starving. She saw terrible things on the streets, and narrowly missed death more than once- attributing a lot of her lucky moments to the presence of a calico cat. It showed up as a stray one day and soon became part of the family (though her parents protested at first). Many times through the war, something happened involving the cat that saved their lives- coincidence or not. And its friendly calm presence definitely helped soothe their nerves and warm their hearts. Sadly, the cat also was a source of trouble later on, and Amra was heartbroken when they faced the possibility of loosing her. The cat proved her loyalty to them again and again, even under great duress.

You know that Amra makes it through all the horrors of war and privation, because this book is based on the author’s own experiences, but it’s harrowing to read of all the losses she witnessed and experienced. She fell in love for the first time during the war, too. There are tender moments, and funny ones, and plenty of teenagers just being regular teenagers, even in such circumstances. Eventually Amra got a remarkable opportunity to leave the country via a scholarship, and was able to start building a new life elsewhere. Her story is told in a plain, straightforward style- which might be dull in other cases, but here I appreciated it, as more detail would have been difficult to read. This line from the book has stuck with me: War does not leave anyone with good choices.