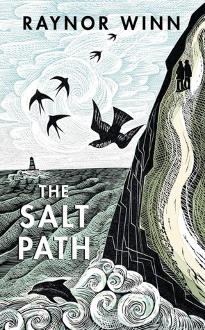 This couple was dealt a double blow in their fifties. After raising their children in a farmhouse they’d renovated themselves, they lost it all due to a bad investment with a so-called friend who turned out to be a bad business partner. House taken away, no livelihood, nowhere to go. All their attempts to find a place they could afford to rent with the little money they had left, failed. Public assistance was not really helpful, and the generosity of friends/family letting them stay wore thin quickly. Then in the same month, the husband was diagnosed with a serious neurological disease. He was told to rest and take it easy, but since they had no home, they decided to just take a long hike, on the South West Coast Path of England, from Somerset to Dorset, all of 630 miles. With two packs, a cheap tent and thin sleeping bags, not much else. So reminiscent of a few books I’ve read about hikers on the PCT or Appalachian Trail, and I also thought many times of George Orwell’s Down and Out in Paris and London. Though this book is really nothing like those. It’s so individual. It was tough. It was wild and beautiful, and the people they ran into were friendly or aggravating, encouraging or unkind in turns. Some just downright odd. They could barely afford food (often went hungry or picked berries, collected mussels on the shore, etc) and rarely pay for a proper campsite, so very soon were dirty and ragged. Fellow backpackers commiserated, but other people they encountered- usually tourists as many of the villages they passed through had long since lost their original occupations of fishing or mining and were now just surviving as tourist attractions- reacted to their appearance in one of two ways. If they said they’d left it all behind and were just walking the path- letting people assume they’d sold their house- they were admired for doing something inspiring. If they honestly said they’d lost it all and were actually homeless, people were immediately uncomfortable or disparaging. If it was by choice they were brave, whereas if by accident, they were pariahs. Why are people so judgmental. I’m sure their version of being homeless- not due to addiction or mental illness but just plain misfortune- is not all that uncommon.

It was a pleasant surprise that I’m vaguely familiar with some of the places they walked through (geography of foreign countries is not a strength of mine). They went through the village where Doc Martin was filmed, along the cliffsides where Poldark was situated, and also Tintagel- site of many King Arthur legends. Also very strange but in the end amusing, was how many people mistook her husband for a poet (apparently famous, but I’d never heard of him). It got to be a running joke between them.

I liked the author’s voice, and look forward to reading her sequel, The Wild Silence. I enjoyed the bits of humor, the interesting encounters along the way, glimpses of wildlife (birds, deer, seals, occasionally a badger), and thoughtful words. Although they’d anticipated the long hike would be a time to figure things out (facing her husband’s illness, grieving the loss of their home, what to do next) for the most part she said they spoke little, reminisced hardly at all, just were. Just surviving. Experiencing the weather, the difficulty of putting one foot in front of the other when tired, hungry and footsore. Finding to their surprise that her husband’s condition improved with the exercise, in counter to the doctor’s advice- I’d really like an explanation for that! And I’m glad that it had a good ending. Just as suddenly as their world fell apart at the beginning of the book, a few things suddenly came together at the end of their hike to put them back in the functional world again. Though- did they want it, now?

But on that beach it was as clear as the saltwater running over the Bideford Black that civilization exists only for those who can afford to inhabit it, and remote isolation can be felt anywhere if you have no roof and an empty pocket.

After meeting a man who was going blind from glaucoma:

The light grew, prizing the sky and the sea apart. Had I seen enough things? When I could no longer see them, would I remember them, and would just the memory be enough to fill me up and make me whole?