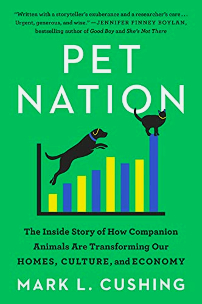 Written by a lawyer who specializes in regulations and policies regarding animal health and welfare, this book is about how pets have become so overwhelmingly popular and pampered over the last few decades. While most of the focus is on dogs and cats, one of the final chapters also highlights birds, reptiles, fish, small mammals and other exotics. It’s got a lot of history and in-depth looks at current trends too. There is a little overlap with the last book on domestic dogs that I read, interestingly. Telling how important dogs were to primitive man, native peoples and early settlers- doing important tasks on farms and in fields. When such jobs for canines became more or less obsolete, they were relegated to backyards or left roaming the streets. Only relatively recently have they become members of the household- receiving special food and sleeping on people’s beds, with their antics and cuteness displayed online. The look at their rising popularity was not particularly new to me, although the numbers are telling. Of more interest was the chapter about how veterinary care has changed, and the one about what seems to be a shortage of dogs in shelters for adoption- this author argues that the spay and neuter campaign of past decades was actually too successful, so that now shelters import dogs from other places that have surplus! He also states that commercial breeders have an unfairly bad reputation, puppy mills are not the norm, and if breeders were regulated and felt comfortable to open their doors and show the public their operations, that could quickly turn around. There’s also a lot touting the benefits of pets in these pages- so much so, that it becomes clear that the goal of the book is to encourage more people to keep more animals, urging us to reach a hundred percent of homes owning dogs or cats, which should be allowed to accompany us anywhere in public. I could not really tell if this was tongue-in-cheek or not.

The book is certainly well-researched with lots of data supporting the author’s views. So why the low rating? Sorry, but I really found it hard to read. The writing style and humor just did not work for me. (I know cleaning the litter box can be unpleasant, but I don’t think of it as torture). There was just so much in this book, presented in brief to-the-point chunks with bold headings that made it feel jumpy. The frequent use of lists, bullet points and pop culture references (some I got, some I didn’t) did not appeal to me. I felt that some things were explained unnecessarily, but then stumbled over acronyms that I had to look up. More than once I was left scratching my head over a conclusion, or having to read a phrase a few times over, because it didn’t click. Overall, I think I just wasn’t the right kind of reader for this book.

Seems this is an updated issue, just a year after the initial publication. To include new snippets of data on how covid affected pet ownership, I suppose. Personally I think the original cover was more appealing, but the current one visually matches the style of the book, so I’m showing that. The subtitle has also changed. Originally it was The Love Affair That Changed America. Now it says on the front The Inside Story of How Companion Animals Are Transforming Our HOMES, CULTURE and ECONOMY. (Yes, with bold caps).

I received a copy of this book from the publisher, in exchange for an honest review.