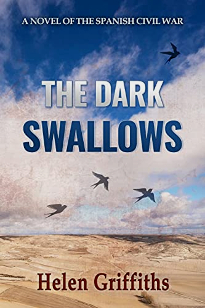 This is the story of two young people in Spain, who fall in love just as unrest broils into civil war. When the first pages unfold, laying down a detailed setting of their lives in neighboring villages, their greatest obstacle is the local conflict. For generations there’s been friction between the two villages, intermarriages seriously frowned upon. I connected with these characters easily, so perceptive and adroit is the author’s description of their thoughts, feelings and intentions. Bernardo, from the smaller village, is a gentle soul, a dreamer who loves books especially poetry, and is content to work with his hands. His brother is the opposite- ambitious, uncaring towards his family, in the end full of fire for one thing- a political ideal. The brothers part ways early, but later their stories intertwine in dismaying fashion. Elvira, daughter of a prosperous shopkeeper in the larger village, is high-spirited and vivacious. She catches Bernardo’s eye at a festival the two villages jointly participate in, and he sets his heart on marrying her. First there is a long, constrained courtship- not only because their families would disapprove, but also because Elvira is held back by her religious upbringing, and harbors doubts (asks herself, does she really love him, or is she just overwhelmed by new emotions?). While Bernardo isn’t as deeply ingrained by tradition, his sole focus is her, and he’s willing to grasp the opportunity presented by a new law: they could have a civil marriage, without their parents’ blessing. A hugely controversial thing back then. As Bernardo grows increasingly impatient waiting for Elvira’s consent, they start planning how to get around the circumstances and be together.

But civil war sweeps over the country. Unlike his older brother, Bernardo has no interest in politics. In attempting to put together a future for himself and Elvira though, his choices go awry and he gets caught up in the turbulence. At first his only thought is to reunite with his love, but then it becomes a matter of just staying alive. Elvira also leaves her village for the city, attempting to find Bernardo, even though she knows it will be risky and dangerous. She has no idea what she’s stepping into. The ending, though so realistic- is tragic. I wish I hadn’t known a crucial piece of it beforehand. The story was gripping enough that I had trouble putting this book down at all over the past two days, but it would have been even more so without a bit of quoted praise in the frontispiece telling me a main characters dies. I guess they had leeway to do so, as the preface written by the author reveals this to the reader. It’s the only criticism I hold about the whole book!

Such a touchingly deep, bitterly heartfelt story. So alive and nuanced. I should have expected it, but I’m amazed at how well this author writes people– the delicate and unspoken connections in relationships. Not only the depth of feeling the two young lovers have for each other, but the disparity between the brothers, the parents’ hopes and fears for their children on both sides, the caution they hold from years of own experience, yet unable to dissuade their grown sons and daughters from forging their own paths, making their own mistakes in the name of love. And the great irony, that those in this story who live in more or less arranged marriages, had some stability, contentment and ease of existence. Whereas Bernardo and Elvira, full of passion for each other, a depth of emotion and loyalty the others don’t understand, could not attain a place to call their own and live together. So sad. Especially how the furious insanity of war rolls over them, catching all these innocent lives up and senselessly destroying them. Some make it through alive, but none are without scars and sorrow. I was reminded so much of a recent read, The Cat I Never Named– different place and circumstance, but the suffering of innocent civilians in warfare so very much the same.

I was very excited to read this book, I can’t tell you how much. Even though historical fiction is not my usual thing, and romance even less so. In the past, I’d always hoped to come across one or the other of this author’s books secondhand- as they were long out of print and hard to find. What was my surprise and delight about a year ago, to be contacted by a publisher who is reprinting all of Helen Griffith’s works. I’m so thrilled at the opportunity to be able to read her books as ARC’s- and very grateful to the publisher who sent this copy to me.