in Life and Legend 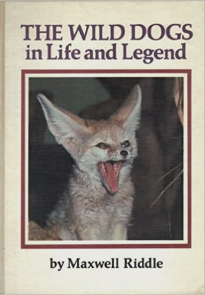 This book is rather like Ravensong, being a mix of factual information and fables or folklore surrounding the animal- but in this case, much better written. And rather like Wild Heritage or Of Wolves and Men, though not quite as in-depth as the latter. In short, it is about all the wild members of the dog family. Wolves, foxes, coyote, jackals, dhole (red dog of India), dingo, bush dog, maned wolf, raccoon dog (of Asia), African wild dog and one oddity: the aardwolf. Also I have no idea why, but the author included a small section on prairie dogs. Maybe to clear up misconceptions about the animal, due to its common name?

Each section starts off telling stories: mostly legends and myths about the animals, but sometimes firsthand accounts that are quoted (with permission) from other books. There are creation stories, trickster tales- especially about foxes, coyotes and jackals- and moralistic fables. Some of these I had heard before, many I had not. I was particularly interested in the ones from other cultures that I’m not as familiar with. I’ve had some exposure to native American legends about coyotes, but the tales of foxes that change into women or raccoon dogs playing tricks on people from Japan, were new to me. After each section of legends or tales, is a chapter of factual information on the animal. While this was current info when the book was written- late seventies- now it’s quite dated. Of the lesser-known wild canines, there’s not much information here: mostly an admittance of how little was known. I was really intrigued by the brief mention of a smooth-coated canine from the Amazon called the short-eared dog or short-eared fox, Atelocynus microtis. Never heard of it before! This animal was practically unknown in the author’s day, and he feared it would soon go extinct. I’m happy to tell you it hasn’t, and I was able to read more about it online. It’s certainly still very rare.

For a lot of the accounts quoted and related in this book, I had already read the original material myself. There are summaries about the Custer Wolf, and of the wolf children from India. Very good summaries, but the original books give you so much more. However, I was delighted to find extensive quoted material from Solo by Hugo van Lawick, about a young African wild dog. I’ve been wanting to read that book for a long time, so I was happy enough to read a large excerpt of it here.