It All Begins with Jelly Beans 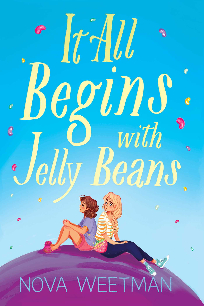 Another book I picked up off my daughter’s library pile, taking a break in the middle of a chunkster. This is a middle-grade fiction about two girls in sixth grade. They’re facing the end of elementary school with mixed feelings (I rather appreciated the negative comments on the grade school “graduation” celebration, haha- having that opinion myself). The girls are not really friends but cross paths when they’re in the nurse’s office for different reasons.  Riley has type I diabetes and often has to stop in with the nurse to manage her condition. She has an overbearing mother and is in a group of popular girls who pressure her to do unsafe things, not understanding how serious diabetes really is. Meg on the other hand, is neglected. Her mother suffers from severe depression after her father died, rarely leaving the house (or even her bed) and Meg often goes hungry and doesn’t have new clothes to wear. She has panic attacks, but also hangs out in the nurse’s office because the nurse will give her food from the teacher’s lounge. Meg doesn’t really have friends, yet starts to have a tentative connection with Riley, which gets rocky when Riley’s popular friends tease and harass Meg. Both girls are having a hard time with things emotional and physical and their contrasting issues with parents. Riley wants to take care of her diabetes by herself instead of her mother micromanaging it- even though she’s not doing a great job with the things she is responsible for- whereas Meg wishes her mom would do anything for her at all. 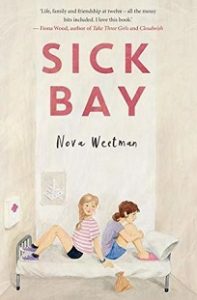 When I saw the bright cover of this book, I thought it was going to be a light, maybe silly story. Not at all. It addresses some serious issues- kids having to live with a medical condition, mental illness, dealing with grief over the death of a parent, difficulties with friendships, and more (there’s another kid in the story who has asthma). I expected at the start that the girls would quickly become friends, but they don’t begin interacting much until near the end of the book- which felt like a realistic development. The story feels very current, full of phrases kids use nowadays (that didn’t exist when I was that age!) And yet something felt a bit off to me. The portrayal of what Meg went through when she wasn’t at school- I kept thinking, is that what it’s really like, for a child living in poverty? I wondered why nobody at the school noticed she was wearing the same clothes day after day, or insisted she put on proper shoes instead of slippers (my child’s school is pretty adamant about shoes) and why other adults didn’t investigate the situation when it was clear Meg often came to school hungry. On the other hand, a review I read written by someone who actually has diabetes, had criticism about how Riley’s story was portrayed. And there’s the questionable revelation at the end, that sometimes Meg is faking her panic attacks to avoid situations. I’m sure there’s kids who would do this, but it didn’t sit well with me.

On a better note, there’s the delightful inclusion of many quotes from Anne of Green Gables. Meg is an avid fan, has read the book many times, and quotes lines from it to people in conversation which throws them off but made me giggle. This prompted my ten-year-old to request a graphic novel version of Anne of Green Gables from the library. I’m glad she’ll finally access the story. I’ve tried to get her to sit and watch a movie version with me- one I’d seen and loved as a teenager- with no success. She thought the story moved way too slow. The novels are a bit beyond her reading level yet, but a graphic novel might be a great introduction.

Borrowed from the public library. Originally this was published in Australia with the title Sick Bay.