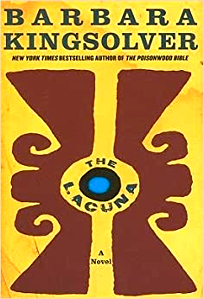 This book has literally sat on my shelf for years, even though it’s by one of my favorite authors. I was so intimidated by it. Historical fiction can get heavy, and this one especially has significant events and looming figures- from revolutionary times in 1920’s Mexico to McCarthyism era America. The viewpoint is an ordinary man (but one I slowly came to respect and admire so much). As a young man he was dragged around Mexico by his flamboyant flapper mother who chased after a string of wealthy boyfriends after separating from his father back in America. Petty much ignored, he spends time swimming in the ocean, enthralled by the beautiful fishes and hidden underground caves- and hanging out in the kitchens where he learns culinary skills. Later as a young man on his own, he becomes employed in the house of Rivera- at first mixing plaster for Diego Rivera’s murals, then working as a cook, eventually becoming a secretary and finally, overseeing shipment of paintings for Frida Kahlo. Who strikes up a kind of friendship with him. He is there when Trotsky takes refuge in exile, and witnesses firsthand violence against the man. In fact it is so traumatic the entire household disbands, he ends up back in the States, suffering probably from post-tramuatic stress disorder, often afraid to leave his home, uncomfortable around other people. Builds a new life for himself as a writer- he always was a writer, keeping diaries and sending letters- now he writes historical novels about ancient peoples from Mexico- the Aztecs, the Maya. They sound fantastically thrilling! and reading about how popularity swamped him, how amusing the reviews of these books that don’t really exist- I loved that part.

I don’t know what else to say. I don’t know how to convey how rich and thoughtful and surprising this story was- even when I had trouble keeping track of what was going on with the politics and history- the strength of Kingsolver’s words kept pulling me onward through the pages, to a startlingly hopeful conclusion, when I thought all had gone to crap.

This book is kind of overwhelming. It’s about humanity, and art, and kindness- even when cruelty and ignorance are rampant. Mostly it’s about a quiet man, who seems hardly present in his own story, seeking to find a place where he belongs. I was not expecting to read (once again!) a novel with a gay character, and I appreciate how subtly that was handled. I was enthralled with the portrayal of culture, art, music, wonderful food in Mexico, and the contrast when the story moved to America. How servants were treated in Mexican households- as people regardless of their employment status- compared to segregation and racism in the States. The clear look at the revolutionaries he lived with in Mexico, in contrast to the political furor in the States, a place full of strangers pointing fingers. I feel like there was a strong message there for me that I’m not quite picking up on. This was a very compelling book, and it’s one I’m definitely going to have to read again someday, I think I’ll get so much more out of it a second or third time around.

It helped that not so long ago I saw the 2002 movie Frida. A lot more would have gone over my head otherwise. I kept visualizing how she was depicted in the film, right down to the voice, and I think it fit well.