The Education of Little Tree 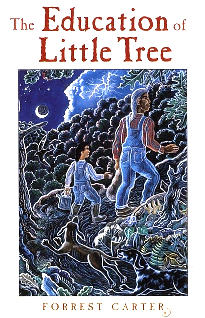 Story of a young boy who is left orphaned and raised by his grandparents in Appalachia. His grandmother is Cherokee and his grandfather half Cherokee. They live in a small house up on a mountainside, with a bunch of hound dogs that protect their corn patch and trail foxes (for amusement). They mostly live off the land, gathering herbs, acorns and wild greens, hunting deer, catching fish etc. But the grandfather also makes whiskey in an attempt to earn some cash, and young Little Tree is learning this skill. Something I never thought I’d read the details of, making moonshine! Most of the story takes place while Little Tree is six years old (he seems older than that though), and there’s other stories told by visitors and friends, or shared family history. The kid does his best to learn what his grandparents teach him- not only to live off what the land gives them, but also to read (his grandmother reads Shakespeare from the library, and has him studying the dictionary) and do simple math. He’s pretty well taught for a kid who’s never gone to school, but when out in public with his grandfather- at the store, on the bus, or sitting in church- it’s apparent that the white folks around them look down on his family for being poor in material goods, for going barefoot or wearing deerskin clothing. Although the kid himself never really catches on that he’s being mocked. Different kinds of people come to their little house- those representing authorities that don’t have good interests at heart, are given the runaround (in some very hilarious scenes). Relatives, friends, and one Jewish peddler however, are welcomed into their home, and Little Tree learns compassion, patience, and other bits of wisdom from them.

Things happen, up and down the mountainside, and I was settling into the rhythm of their days, the picture of life in the backwoods this gave me, when suddenly authorities find out this kid is living with his grandparents and not in school. They pull him out of his home and send him to a religious boarding school. Where things are very unpleasant and oppressive, to say the least. I’m glad the kid made it out of there, but the ending had me feeling really sad.

This book brought two others to mind while I was reading it: Where the Red Fern Grows (because of the hound dogs) and Where the Lilies Bloom (the setting and overall style). But once again, it’s one that makes me grit my teeth when I look about online after and learn some facts. When this book was first published the author said it was autobiographical. Nope. He’s not even Native American. Before I was aware, I was enjoying the read and thought it a good story, but now I cringe at the things I didn’t question in the narrative, that are so blatantly wrong or stereotypical. Have to read with  doubt in mind now: American Indians in Children’s Literature made me aware of some issues with this one. I feel like I should remove it from my personal collection.