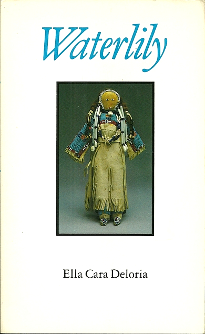 Slice-of-life novel about Sioux people in the nineteenth century, when encroaching white men were just a rumor on the land. It is a very detailed look at their lifestyle, from the women’s perspective. Most of the story is about the duties of relationships, how the children were raised, how a woman’s life was shaped by the relatives that surrounded her, and how that shifted when she married. The narrative is rather dry in style, but not without some tenderness, humor and tragedy- though sometimes you have to read between the lines to pick it up. The central character is Waterlily- from her birth while the camp is relocating, through her years growing up, to her own marriage and finally having her first child. Her personality is contrasted by that of various other young girls- cousins and friends (some of whose behavior is frowned upon). She is conscious of always striving to honor her family by doing the right thing, giving gifts when it is expected, showing deference to men and elders. An important aspect of their society was the gift giving, so that goods did not belong to any one person for long, but made the rounds continually through the community. She listens to stories of her people’s past, watches ceremonies from the sidelines (including the Sun Dance, that was interesting as I had only vaguely heard of it before), and tends the younger children.

Then a certain young man catches her eye, but it’s not proper for a young woman to chase after a man, she has to indicate her interest subtly, if at all. Meanwhile she’s expected to accept a different young man from another group who asked for her in marriage, because it will enable her parents to honor someone else they’re indebted to. She does what is expected of her and moves to the other camp, where she doesn’t know anyone at all. They are kind and welcoming, but she always feels constricted by formalities among them. Waterlily is relatively content though, and looks forward to building a life with her new husband. Then someone brings blankets into camp, that foreign soldiers had dropped on a path. The blankets are coveted as a novelty item, and in the traditional gift-giving are passed around from family to family. Then many of them start to fall sick, with what sounds like smallpox. There are many deaths, in spite of their efforts to slow the spread of the disease (which they realized too late). Waterlily is soon bereft of her husband, afterwards feels even more alone in the camp. She finds means to travel back to her parents’ camp, where to her surprise, another man soon approaches her with thoughts of marriage. In this second match she is more at ease, and finds contentment and gradually, a secure feeling of joy.

I thought some of the most interesting parts in the story were when Waterlily and her companions first heard of the white men. They were fascinated with the curiosity of men having pale hair and blue eyes, and shocked when they heard that white parents yelled and hit their children to make them behave (this was from someone observing a few white families that lived in a fort). Another episode that really struck me happened when Waterlily was a small child. She was alone in the tipi in the care of her blind grandfather, stealthily got out some very rich food that was kept hidden, and ate way too much of it which made her sick. When the family found her semi-conscious they seriously feared for her life (thinking that fainting would bring on death). She recovered the next day and they made an elaborate ceremony to celebrate how her life had been spared! They really treasured their children, and worked very hard to live in harmony with everyone around them.

This book in tone is rather like Once Upon an Eskimo Time. It’s not the easiest read, doesn’t have a lot of plot or exciting events, mainly being just a detailed account of everyday life. The author was part Sioux- her father was a Yankton Dakota and her mother was of French, German and English heritage. She grew up on the Standing Rock reservation and became a linguist and educator, spent much of her life working to record Native American legends, oral history and language. So none of the accuracy issues here that I had with the previous read. Far from it!

More opinions: Dear Author
anyone else?