or, Life Among the Lowly 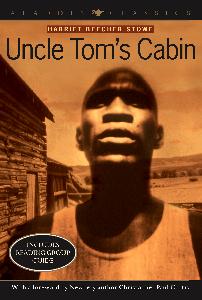 Another hefty classic, and one I honestly might have never opened except that I found a copy at a thrift store for a dollar. So I figured I’d better read it. Mostly because it was such an important book, helping to prompt the Civil War and end of slavery. Also I was interested to see how it compared to Gone With the Wind. I’m certainly glad I read it, but I doubt I will ever repeat the experience.         – – – warning for SPOILERS below – – –

Uncle Tom’s Cabin is based on a lot of true-life characters and incidents the author was acquainted with. She wove them all into a story that focuses on one enslaved black man named Tom, but also incorporates a multitude of side stories. So much so that sometimes I forgot completely about previous characters until they resurfaced and I had to remember who they were! (Also confusing is that there are two men named Tom, and two named George in the story- and in each case one was a slave and the other a white man.) As the book opens, a wealthy man who owns many slaves- and treats them decently- falls into debt and has to sell some of them. He determines to sell Tom and a young boy named Harry. Tom accepts his fate, partly because his master promises to try and buy him back someday. The boy’s mother, Eliza, is distraught at being separated from her child, so she runs away with him. There’s lots of chasing and fuss (other slaves on the farm are ordered to help track her down but they do everything they can to hinder the chase and give her a head start, which was somewhat amusing). She makes a desperate and very dramatic scramble across a river choked with ice floes, is taken in by some Quakers, and eventually makes her way to Canada via the Underground Railroad. The odd part is that right after a very intense scene where Eliza, her child and a few others are cornered across a ravine near a cliff by some tracking men with dogs- with firearms employed and shots exchanged- the narrative suddenly switches to following what happened to Tom, and doesn’t return to Eliza’s story until nearly the end of the book. I almost forgot where she was.

Tom ends up in a well-to-do family with some very interesting characters. Most prominent were an angelic blond child  who never did any wrong, talked religion nonstop and was fawned on by everybody. I’m sure she was admired by the public back when this book was published, but she just rubbed me the wrong way. Surely no child could be so perfect. I can imagine a teenager or young adult swept up in religious fervor maybe speaking the way this girl did, but a six-year-old? It really strained my credulity. In contrast to her, there was a black girl of the same age enslaved in that household who was an utterly beguiling, mischievous kid deep in the habit of lying and stealing without any remorse. (When asked why she did things she knew were wrong he reply was often: ” dunno, ‘speck it’s ’cause I’s so wicked!”) I found her character much more interesting to be honest. I wish there’d been more Topsy in the book.

Of course I’m leaving so much out. There are many events and other characters brought into the book. Tom is close to the angelic blond girl (daughter of his master) because she’s so sweet and good, and reads the Bible to him while they encourage each other in religious devotion. But this tolerable, somewhat benevolent situation ends and Tom is sold again- further South to a dilapidated plantation on the edge of swamp. Here all the slaves are beaten regularly and treated very badly, basically worked to death. Tom does his best, uncomplaining, and supports those around him- helping his fellow men, encouraging them to have hope (mostly in the afterlife) and obeying his terrible master, except when he’s order to whip one of his fellow slaves. In the end, two of the younger black women orchestrate a clever escape, and Tom dies because he is treated so brutally when refusing to disclose information on their whereabouts.

It’s powerful storytelling. I did enjoy some parts of it, but others were very hard to read. Not only because of how inhumanely people were treated (even the well-meaning “kind” masters still owned people and bought into the system) but also the phonetically written dialect of the black people was cringeworthy, the moralizing and religious sentiments were very thickly laid over everything, and even though you know the author wrote this to show how wrong slavery was, and that black people are just as intelligent as anyone else- her descriptions of them were still to some degree insulting and derogatory. Many of the characters felt like mocking caricatures of types, not real people.

Yet I can well imagine how galvanizing this book was to public opinion, when it was first published a hundred and seventy years ago. Apparently it instantly outsold the Bible, and is considered to have been the first bestseller. However, I’m very ready to move on to other reading now.