the Story of a Boy 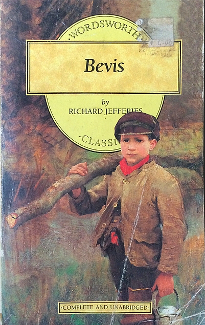 Marvelous (but also disturbing) book from the 1800’s- others have described it as something like Tom Sawyer or Lord of the Flies and I heartily agree. It also reminded me a lot of Ernest Thompson Seton’s Two Little Savages. Bevis is the son of a landowner in rural England- and he pretty much runs around doing whatever he pleases. When the story opens, it drives straight into his efforts to build a raft out of odds and ends- I was baffled for a few pages wondering who this kid was, where he lived, what the heck he was doing, but then caught up in his unwavering intent to find items that would work to make what he wanted- because I’m a bit like that myself, when building something or other for the garden. After making the raft he goes on to rig a little (and very awkward it sounds) sailboat, he and his friend carve a boomerang, make a matchlock gun (!!), practice with bows and arrows, shoot targets with their various weapons, learn how to swim, roam around hunting rabbits and birds with their dog, stage a battle with a bunch of other boys- taking sides and planning strategies the whole nine yards, and so on and on and on.

The part I remember best is middle to the end, where Bevis and his friend Mark build a camp on an island in a lake near home, lie to their parents that they’re at someone else’s house for a visit, and live rough for a week or so. They fish, hunt small game, make pitiful attempts at cooking over a fire (with supplies filched from home like flour, potatoes, matches etc), construct a sundial, track animals pretending everything is exotic- the other kids trying to find their secret place are ‘savages’, the rabbits are ‘kangaroos’ the wood doves are ‘parrots’ you get the idea. They have to solve a little mystery of what is coming into their camp when they’re away stealing food, and another about what animal makes a wave just under the water’s surface (I thought it would be the otter but it was a type of diving bird). I was very sad when they shot the otter. It really is a story from a different time- the kids live in casual abundance- the pages are swarming with beautiful descriptions of nature, lush plant growth, myraid small wild things- which the boys delight in tracking, chasing and killing. They shoot birds for their feathers with no remorse, and are really proud of the otter skin. When they finally go home everyone praises their accomplishments and the father teaches them how to improve their shooting skills (this went on for way too many pages in my opinion). I was rather fascinated by the descriptions of sailing, though. Amazed at how ingenious the kids were at making things from observation and experiment alone. Appalled at how often they beat and kicked their dog to make it behave, and how they ignored the abject poverty the workmen’s children lived in, right alongside them on the farm but their suffering unseen.

It’s lively, full of adventure, boy’s squabbles and petty cruelties, and the richness of nature. I found it a compelling read, even though some things bothered me.

Some quotes I marked- the boys’ explanation of hindsight: “That’s just the thing”, said Bevis. “You sail forty thousand miles to find a thing, and when you get there you can see you left it at home.”

Their surprise at seeing a yellowed fern leaf, where they were sure it was an animal in the grass: when intent on one subject the mind is ready to construe everything as relating to it, and disallows the plain evidence of the senses.

The father’s appraisal of how important it was for them to learn things by experience:

He considered it best that they should teach themselves, and find out little by little where they were wrong.  Besides which he knew that the greatest pleasure is always obtained from inferior and incomplete instruments. Present a perfect yacht, a beautiful horse, a fine gun, or anything complete to a beginner, and the edge of his enjoyment is dulled with too speedy possession. The best way to learn to ride is on a rough pony, to sail in an open ill-built boat, because by encountering difficulties the learner comes to understand and appreciate the perfect instrument, and to wield it with fifty times more power than if he had been born to the purple.

I have a copy of this book on my e-reader (it was a pleasure!)