A True Story of Risk, Adventure, and the Man Who Dared to See 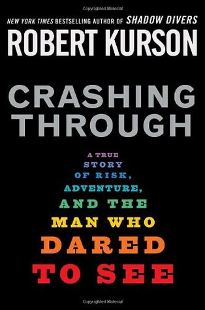 Part casual biography, part scientific explanation about how vision works, what it’s like to be blind, and to regain sight. Mike May was blinded in an accident at age three. He did not let lack of vision slow him down- hence the title of the book- plowing headlong through life as an inventor and entrepreneur, seizing opportunities and delighting in new experiences. As a teenager, he once tried to drive a car by listening to the sounds of traffic passing (on a very quiet street, but still!) He learned to downhill ski and held a world record in the sport. He once built a radio tower in his backyard. And that’s just mentioning a few of his accomplishments. Got around just fine with a cane and a seeing-eye dog, never felt that life was anything but great. Then he chanced to meet a doctor who told him about a new type of stem-cell transplant that might restore his vision. He decided to try it, even though the chances of rejection or risks of cancer from the medication he’d need were high.

I thought these were the best parts of the book, descriptions of what it was like to see for the first time- it was really interesting what things leapt out to him as novelties or worth study, that nobody had ever described to him, or that he just wasn’t aware of as a blind person. For example, he was surprised to see that carpets have patterns on them, and really bothered at seeing a homeless person on a sidewalk, that everyone else just walked past. (Less interesting for me, was reading about how much he wanted to ogle women, his constant and rather juvenile obsession with female bodies). He had to learn all over again to identify things he’d only known by touch or sound, to retrain his brain with his new perception. Fascinating the explanations of how the brain interprets vision and learns it categorically in infancy- for some (of the very few) people like Mike May who received their sight again as an adult, parts of the brain have literally forgotten how to see and have to learn all over again. Sometimes they can’t and the adjustment to receiving sight after a lifetime of being blind can cause stress and severe depression. In his case, May was able to see and understand some things, not others (very specifically- he couldn’t read or visually interpret faces). For months he hoped the ability would just come back to him, then decided to learn it by rote memorization. To the point where he could more or less see automatically instead of having to puzzle out what he was looking at over and over again. A thing which the doctors had told him would probably be impossible. Amazing story.

All that aside, this book was a new and uneven experience for me, because I thought I was getting a paperbound copy, but it came to me as an audiobook. I was initially annoyed. This was my first experience with an audiobook. With an older, used CD-player my kid didn’t want anymore, and an obviously used set of CDs that are the book itself. I missed large sections of the first few chapters because the CD kept skipping. The rest of the set was more or less okay, though it had lags or skips here and there so I’d miss a word or sentence. It was also hard to navigate where I was- the player couldn’t “remember” where I’d paused (like the one in my car does) so I’d have to skip through from the beginning to find the closest location to start again when returning to it- with a lot of overlap, listening to many parts over again. Sometimes I couldn’t get close at all- not sure if this is a flaw in how the player is functioning, or the CDs themselves. I should try at least one more audiobook, to see if the player was at fault or not.

I found it odd to listen to one person’s voice for so long. Definitely not something I could do while driving (too distracting) but it was kind of nice to listen to while doing simple chores around the house. I usually listen to music or a podcast when doing jigsaw puzzles, but now think it might be nice to do two things I enjoy at the same time- listening to a book while puzzling! However the voice really did drone on. Depending on my mood, sometimes I found it irritating, other days I was able to just focus on what the voice was relating, and get lost in the telling. It is such a different experience though, I find it hard to say “I read that book” when I listened to someone tell it to me. I’m game to try another few, but don’t know if this will become a regular pastime for me.

I did really like a special feature at the end of the audiobook, where the author himself interviewed Mike May, seven years after the book was first published. It was kind of awesome to hear the subject of the book talking about his personal experiences.

More opinions: RA for All
anyone else?