The Inner Life of Animals 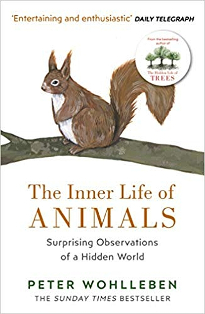 This was an unintentional re-read for me. And uncommonly soon, as the previous read was only five years ago! What happened was, I had written the title wrong on my previous post (now fixed). So it didn’t come up in a search, when I thought: this book is so familiar, have I read it before? By the time I realized I had, I was far enough into the narrative to be intrigued by all the parts I’d forgotten, so continued to the end. It really was surprising, what things I so clearly remembered from before (the squirrel mother nearly strangled by young she carried to safety, deer hierarchy changing when the leading doe looses her fawn) and what leaped out at me seemingly entirely new. Did I just forget so much, or did my mind skim over them when I was reading? I wonder if it’s the different voice that made other parts stand out.

Because this time it was an audiobook. Borrowed from the public library. Reader’s voice Thomas Judd. The book is full of examples of animals experiencing emotions and demonstrating thought processes or intelligence. From lab rats dreaming about their tests in a maze to goats and dogs adopting orphaned animals (sometimes of other species). Crows sliding down snowy rooftops over and over again- seemingly for fun. Horses in old age becoming fearful of lying down to sleep- because they’ll struggle to get up again. Hedgehogs apparently having nightmares when too-warm temperatures in winter rouse them from hibernation- but they can’t actually wake up. Pigs running to get their feed when called individually by name. Sometimes the examples are of limitations as well: are dogs really feeling guilty when you scold them for wrongdoing? or is it just an expression of submission that we interpret that way. There was more in here about insects, tardigrades and other tiny life forms than I had remembered. Also some musings on the possibility of plants having some kind of memory or feelings- that causes a conundrum for this author who makes it clear he thinks hunting is abhorrent and we shouldn’t be eating animals at all- but then if plants can feel, is it also morally wrong to eat them. Kind of leaves you nowhere.

Anyway, this was an odd experience for me in another way because once again I switched technologies, ha. I got into audiobooks a short while back when received one by mistake. Then started having fun listening to more books while doing household chores. But my devices kept failing. First I was using an old boom box my teenager discarded, to play books on CD from the library. The power cord was missing but it had batteries. However when the battery life ran out I didn’t feel like buying more (it need six very large ones). We tend to hang onto lots of old stuff around here so I looked and found an MP3 player (also ditched by a kid years ago- everything is on their phones now). This worked great- except it will only read certain formats, so some of the audiobooks just don’t work. So I gave up on that and popped the audiobooks into the DVD/Blu-ray that’s still hooked up to our TV. That conked out on me entirely just a few days ago. Sound gave out. Popped a movie in there, same problem. Disappointing because I did like borrowing movies from the library now and then, to watch things I can’t find on any of the platforms we use (Netflix, Amazon Prime video, etc). It was a really old DVD player though.

Then my husband said well, let’s just look here- and pulled up the audiobook I was currently trying to finish on Youtube, via our television. I had no idea you could listen to entire audiobooks on Youtube. It’s actually a nicer experience than any of the other devices, because I can use the fancy new headset he got to listen to it anywhere in the house, doing any of my tasks, without disturbing other people. But really it feels so odd to finish the book and not have an item in hand to put back on my shelf, or return to the library. I don’t know how many other books on my TBR (still sticking to nonfiction for listening) are available in this format, curious to see now.