The Man Who Lives with Wolves

by Shaun Ellis and Penny Junor 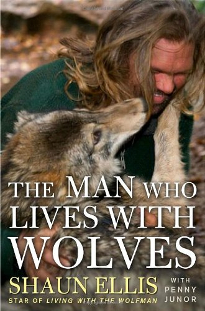 It’s what the title says. The book starts out describing his background and childhood on a farm, how he slept in the barn with his grandfather’s dogs, did physically demanding jobs as a young man and then spent time in the army building up stamina and endurance, learning to survive extreme environments. All of which led eventually to him living among wolves. His interest started with foxes in Europe. (Had a job working for a gamekeeper but got in trouble for observing and feeding the foxes instead of killing them like he was supposed to). Then he worked with several different captive wolf packs in wildlife parks- at first just as a volunteer, barely scraping along as he had no income. Learned some skills assisting with scientific observations and wildlife care, then decided he wanted to make contact with a wild pack in Idaho. To learn more about their behavior and communication firsthand. He claims to have lived in the forest with the wolves for two years- though much of the time was spent just staying in place attempting to gain their trust at first. He ate raw meat alongside them and communicated with body language, which meant he often got scraped, bitten and knocked over by the wolves. The number of times he had a mild concussion or internal injuries (urinating blood) is troubling. Not to mention what the diet must have done to his body.

Reading about the intimate family lives of the wolves and how he taught himself to be among them was pretty fascinating. However some of his conclusions about how diet affects the wolves’ behavior, including their role in the pack, didn’t make sense to me. He also had some ideas on teaching the wolves about humans, so that wild wolves could better avoid conflict with people, but I didn’t see how this worked really. There was a part about helping farmers avoid livestock losses by playing recordings of howling packs nearby, so they would avoid the area thinking other wolves have claimed it. I’ve heard of this method before and it was interesting to see another instance of its use.

Well, the book goes on to describe how this man acquired his own captive pack and land to keep it on, hoping to educate the public about wolves. He also had some ideas on teaching wolves about humans, but I didn’t see how this worked really. There was a part about helping farmers avoid livestock losses by playing recordings of howling packs nearby, so they would avoid the area thinking other wolves have claimed it. I’ve heard of this method before and it was interesting to see another instance of its use.

Later part of the book relates how he fell in love and got his new girlfriend involved with the wolves. Which sounded very unsafe, to say the least. Also a film documentary and television show were made about his wolf pack, and the pressure put on them by the film crew sounds awful. Especially the drama that was deliberately hyped up. Meanwhile it becomes very clear that he was so fully dedicated to the wolves – spending long hours in the pen with them, sleeping among them at night- that his relationships with people (including previous wives and children he rarely saw) suffered for it.

There’s also parts in this book where he compares wolf and dog behavior, and explains how he used his knowledge from the wolves to help people with dog training. I think he’s written other books specifically on that topic. Which sounds like it’s met with a lot of controversy, not to mention the criticism from wildlife experts on what he’s done with wolves. All of this reminiscent of The Grizzly Maze, or GoatMan. Not sure whether to admire the man, or think he’s crazy.