The Man Who Loved Books Too Much

the True Story of a Thief, a Detective, and a World of Literary Obsession 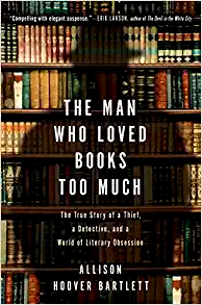 Deep dive into the world of rare book collectors- in particular, one man who for years methodically stole expensive books from rare bookshops and dealers at book fairs, to build his own collection. Aggravatingly, in spite of being incarcerated numerous times for stealing credit card info, impersonating people whose accounts he used, shoplifting valuable books (getting caught red-handed at least once) and more he was very much at liberty when the author wrote this. In investigating his story, the author herself went to book fairs and shops, talked with book dealers, visited collectors’ homes, and even perused some rare copies herself, to buy a first-edition of a beloved childhood classic (a desire that often gets people started collecting valuable books, she says). She conducted interviews with the book thief, both in jail and while he was at liberty. She also spoke numerous times with a book dealer who was trying to track down the thief and put a stop to his activities.

There’s much in here about what makes certain books so valuable, with descriptions of extremely rare or noteworthy tomes that can make a reader swoon. I’m not one to gather pricey copies for my personal library- I prefer books that actually get read and handled a lot- but something about this makes me start to understand people who do collect them just for their worth as fine objects. This man compelled to constantly thieve and hoard books was something else, though. What really struck me as surprising, was how readily he explained himself to the author, even admitting in conversations and interviews what he had stolen, when and how. It was kind of shocking his complete lack of guilt, his apparent conviction that society “owed” him something, that he had a right to get things for free (not just valuable books, but hotel room stays, restaurant meals, etc). The glimpse the author had of his childhood home, and meeting his mother, hinted to me that this collector’s obsession may be, in some way, an inherited personality trait? I don’t know, but it sure was fascinating.

Have to eat my words from a comment I left on someone’s blog the other day: here is a true crime book I actually liked! It kind of breaks the fourth wall near the end too, in a way- the book thief knew the journalist was writing his story, and mused on how it would end! Side note: I was surprised to see a lot of criticism and disdain for this book in online reviews, on that site that is eating the world. A lot of readers felt the criminal was just a petty credit card thief, did nothing spectacular that deserved notoriety, and/or disliked how the writer included herself in the narrative. For my part, I didn’t at all mind the personal perspective- I appreciated it in fact. It made me reflect on my own bookish affections. And I don’t read enough crime (fiction or otherwise) to need to be impressed by someone’s underhanded skills. So I enjoyed it well enough.

Audiobook, borrowed from the public library. The voice of reader Judith Brackley was pleasant to my ear. No issues with the copy. (Still having mixed success though- I was going to listen to Trevor Noah’s Born a Crime just before this, but found the case missing the first CD. I tried A Piece of Cake by Cupcake Brown but my device wouldn’t play that one at all).