Loose the Wheat, Loose the Weight and Find Your Way Back to Health 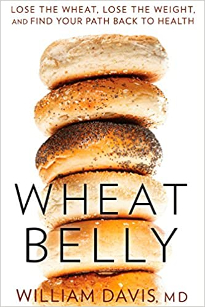 When I started this one a week and half ago (listening to the audiobook version), I’d already been gluten-free for months, and have no plans of changing that. So I didn’t seek out this book to convince myself of the benefits of a gluten-free diet, rather I noticed it on a shelf and was curious to learn more. I agree with a lot of what this doctor says, simply because it validates my own experience. Other parts I had difficulty following- the details about LDL particles, for example- or was puzzled by. Some things he talks about took me by surprise, but the problem is I don’t know enough to judge. If some of the things the book says are wrong or mistaken, that doesn’t mean all the info is wrong? So how can you tell. I would say: read this one with a heaping grain of salt:

First the doctor (a cardiologist) goes through the history of the wheat plant, stating that it’s been changed so dramatically by selective breeding that it’s no longer the same. And that the changes, specifically in the proteins, cause health problems for some people. I kind of thought this book was going to be all about gluten intolerance, but it’s not, although that is a big focus. It’s also about how components of wheat affect the appetite and spike blood sugar. As you might expect from a book about a specific diet, there’s lots of amazing-sounding stories of people recovering from lifelong issues when they eliminate wheat. And not all heart problems, which is this author’s specialty. Diabetes, brain functioning, skin rashes, joint pain, overall body pH (which admittedly I did not understand), etc. He doesn’t mention the affect on sleep patterns- which was the most significant thing for me- but other symptoms I have experienced that disappeared with wheat elimination are explained here.

At the end of the book there are suggestions on how to avoid wheat- much of this was already familiar to me. But then it takes an odd turn. I thought this book was about how wheat is bad for you, why, and how to get rid of it in your diet. At the very end the author suddenly starts going on about avoiding nearly all grains, eating very little fruit (too much sugar) and having unlimited nuts and healthy fats in the diet. Lots of meat and vegetables he says. I don’t know- that starts sounding more like a paleo or Atkins diet (which I don’t know much about). This threw me off. And I’m not going to follow that. I did listen through to the end, although the pages naming foods to avoid (hidden wheat gluten) and those that are healthy, including sample menu for a week- were kind of difficult. It’s hard to not drift off when listening to a list. I’d rather skim with my eyes. This audiobook included a disc with a PDF at the end, that has recipes. I didn’t look at them.

I found the reader’s voice okay, it was Tom Weiner. What did start to annoy me were the author’s attempts at humor or connecting with his audience (so I assume) by using popular cultural references- comparing things to famous people, movies or songs. That just never works for me. And the snide criticism towards both advertising and health agencies that encourage people to eat wheat products felt a bit much, too.