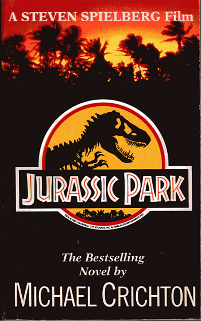 I still vividly remember seeing the movie of this for the first time, decades ago. Finally satisfied my curiosity to read the book. It wasn’t nearly as tense as I expected, probably because I already knew the storyline- only a few scenes were unfamiliar, or different from my memory. For example, when there’s a sick dinosaur in a field, I remember that being a triceratops in the movie. In the book, it’s a stegosaur. Just in case anybody reading this finds it unfamiliar, here’s a brief synopsis: scientists figure out how to extract ancient DNA from dinosaur blood in prehistoric mosquito innards, and use it to create living dinosaurs. Extremely far-fetched idea, even considering what I’ve read about scientists trying to recreate a mammoth (fetus grown inside a surrogate elephant), or the quagga from back-breeding zebras, and now what about re-assembling the DNA of a thylacine. Maybe possible?  Dinosaurs- no way.

But of course it’s fun to run with the idea, and that’s exactly what this author did. With a wealthy guy who has no proper sense of responsibility at the helm, who bought a private island and turned into a giant theme park of sorts, populated with fifteen different species of dinosaur. Not as they had existed eons ago in reality, but as close as they could get, with DNA “patched in” where segments were missing. I’d like to know more about how that was supposed to work, but a lot of things in this story are glossed over with one or two smart-sounding sentences and then the plot moves on quickly to danger and drama- exciting you know. Some people go to tour the island for an inspection, and sombody’s kids arrive there too for who knows what reason- and of course things go drastically wrong. Because of greed, and one computer nerd guy shutting down systems to smuggle out dinosaur embryos. And a tropical storm which causes further damage on top of the sabotage. Dinosaurs start running amok, getting into areas they were never supposed to, people are separated, kids in danger, the boy in the end is one who saves the day with his computer skills. Beyond me. I know a little about computer code, and even having it spelled out for me in the book, I didn’t get what he did.

Well, in the end quite a few people die (this author apparently has no qualms about killing off characters) and dinosaurs prove their behavior can be quite unexpected, which is delightfully interesting. The individual I found most intriuguing this time around- back when I watched the movie I just rolled my eyes at his rambling theories- but now I actually slowed down to inspect those ideas- was the brilliant, sarcastic mathematician who says all kinds of things about “chaos theory” and how randomness eventually overtakes any system, destroying attempts at predictability. My favorite quote in the book is from him: “We live in a world of frightful givens. It is given that you will behave like this, given that you will care about that. Isn’t it amazing? In the information society, nobody thinks. We expected to banish paper, but we actually banished thought.”

What I found surprising, was how dated this story felt now. Startling that when all the computerized systems go down, nobody can call for support from the mainland- because there’s no cell phones of course. I was puzzled why they used motion-detecting cameras to track the dinosaurs on the island- why didn’t each individual animal wear a tracking device? and other places where the technology didn’t quite seem to be on par with their capabilities to re-create living prehistoric animals.

Oh well, it was darn fun. I just bashed out my immediate reaction on closing the last page, to the keyboard here. Could say a lot more about it later if anyone’s interested. Who out there has read the book? or wants to pick apart inconsistencies in the movie version with me? I’m looking for the sequel in the library database now.