Out of Noah’s Ark

The Story of Man's Discovery of the Animal Kingdom 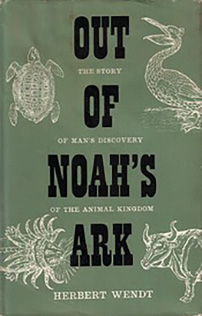 Translated from the German by Michael Bullock

This book is full of accounts on how Europeans first discovered unfamiliar animals- with accompanying feelings of shock, disbelief and wonder. There are stories of explorers who searched for years following rumors of strange creatures, and other stories of people who stumbled across species long-thought extinct, or completely unknown to science, purely by happenchance. Of course while all the tales are of “new” and “unknown” species, the natives of the lands they come from, were usually very familiar with said animals. Sometimes they were surrounded by myths and fearful superstitions, other times names or accounts of two different creatures were confused, so that for a long time the Europeans had a muddled picture. Overall it’s a book solidly set in its viewpoint, and also its own timeframe- published in the fifties, it bemoans the fact that newly-discovered pandas (called “bamboo bears”) would likely soon be extinct for example, and surmised that other animals which were rumored of would soon be found (lots of those turned out to be pure fabrication, so for once I made pencil notes in the margin, because looking up those animals landed me on cryptozoology pages!) So much like Wild Heritage it’s now very outdated but was captivating regardless.

I read about many curious yet (to me) somewhat familiar animals- the takin, komodo dragon, giant squid, kiwi bird, coelacanth and kakapo (a flightless parrot). There’s wonder at others that are such common knowledge now- penguins, giraffes, elephants, gorillas, even the pygmy hippo. First encounters with lemurs, kangaroos, armadillos and tapirs. Some animals just get mentioned in a few sentences or a paragraph, others are given much more detailed accounts, though it’s usually more about the people who first described them, or battles between explorers and scientists to control data and knowledge! (Did you know that Audubon couldn’t publish his work for years, because a rival smeared his reputation? There’s stuff in here about Wallace and Darwin too, though not nearly as detailed as what I’ve read in Song of the Dodo). The duckbill platypus, okapi and hummingbirds in particular. Discoveries of tiny single celled organism when rudimentary microscopes were first invented, and of some deep-sea creatures like the siphonophore and anglerfish, when diving apparatus were made. There are pages in here about how vague accounts and tall tales about animals from distant lands became mythological creatures- the rhinocerous, oryx and narwhal contributed to ideas of unicorns, and the dugong, manatee and stellar’s sea cow to mermaids, respectively. In another account, it was outright fraud perpetuated for years, that kept people in the dark- bird of paradise skins were first sold as rarities to wondering Europeans, who thought the species actually had no feet and spent their entire lives “in the heavens” (hence the common name). (It was just the way the skins were prepared. When the natives realized what huge sums people would pay for them, of course they kept the ruse going as long as they could).

Scientists and professors got a bit wiser and more skeptical over the years, so when the first platypus specimen came to light, it was initially dismissed as a hoax and examined for stitches! Much in here is about how findings of strange animals led to new understandings of evolution, filling it gaps as it were (though now some of that information is now deemed wrong). Other parts tell sadly of how animals were found, and just as quickly erased from the Earth- the dodo, great auk, thylacine, moa and so on. And then there’s animals I never heard of before- the pacarana which is a South American rodent, and the giant rail or takahe from New Zealand. This book can feel a bit jumbled as it does jump from one account to the next without much apparent organization, but it was a much more engaging and entertaining read than I expected.