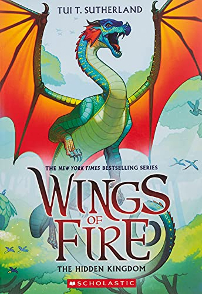 Note there are probably some SPOILERS if you haven’t read so far in the series.

This book is from Glory’s viewpoint. Now the dragonets head into the rainforest kingdom. Again, nothing is as they expected. Really, there weren’t many expectations as nobody knows much about the Rainwing dragons, but Glory was hoping to find that the slanders she’s heard all her life about Rainwings being lazy were untrue. Unfortunately, it seems there was a reason for that stereotype. The rainforest dragons certainly are different, and have a very relaxed, unconcerned attitude about almost everything. They reminded me of the futuristic humans in H.G. Well’s Time Machine, and in some ways also a certain rabbit warren in Watership Down where everyone enjoyed the plenty and ignored the dark side of things. Because although the Rainwing dragons are beautiful and life in their kingdom seems easy, some of them have been disappearing- and nobody cares to find out why or look for them. Glory and her friends are appalled at this attitude, and take it upon themselves to solve the mystery and rescue the missing dragons. In the course of their investigation, they find hidden magic passages to other parts of the world, sneak into a Sandwing fortress in disguise, meet an assassin who has the most unlikely personality for that job ever, become acquainted with the third Sandwing queen Blaze (who is just as shallow and unintelligent as the rumors always said). Another big surprise in this book is that the Nightwing dragons don’t appear to be as all-knowing and dangerous as they’ve led others to believe. Some of the dragonets end up in the Nightwing kingdom, which is a dark and dismal place. Also conspiracies are coming to light- apparently the Nightwings and the Talons of Peace each have “replacement” dragonets they’d rather use to fulfill the prophecy, and some of our gallant young five are wanted dead.

No surprise, there’s continued violence and threats in this book. Some of the dragons are downright cruel to each other. Then there are absolutely silly scenes, like when Blaze is going on about throwing a party for the dragonets, totally oblivious to the reality of the situation she’s in. Or when Glory, frustrated at the Rainwing’s lack of action regarding the missing dragons, decides to challenge the current queen, and finds herself in a series of competitions to win the position. Full of squabbles and cheating, just like a bunch of children. It was at turns amusing and intriguing. I did really like reading Glory’s perspective- she realizes that some of her difficulties come from having grown up shut away in a cave, when Rainwing dragons thrive on sunshine (literally, they need to soak up sun to recharge their energy). She’s glad to finally experience the life she was supposed to have lived, but also unsettled by how, well, lazy and unproductive it seems. Among other things. This story kind of barrels through everything and pitches the reader into a cliffhanger, so I’m on to the next soon.

Two other details I found really interesting: the Nightwing dragons appear to have some similarities to komodo monitors, in how they feed. And the sloths in the Rainwing kingdom annoyed me. Not that the dragons kept them as pets, or the constant reference to their cuteness, or their muffled unintelligible noises, but that they were described as scampering or otherwise reacting at normal speed. Maybe in this made-up world sloths aren’t so very slow? Minor thing, but it just kind of threw me off because it was so unlikely, that part of their behavior.

More opinions: Charlotte’s Library
anyone else?