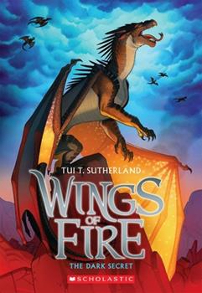 Warning for a pretty big SPOILER below!

This book felt a little darker than the earlier Wings of Fire books, and not just because some dragons die in horrible ways. A lot of it takes place in the Nightwing kingdom, which is doomed- natural disaster looming. The Nightwing dragons are in desparate need of a new home, and their plan is to relocate to the rainforest- ousting the Rainwing dragons by force. Luckily our narrator, Starflight in this case, with his companions starts to figure things out. He meets his father (the encounter is not stellar), finds out the Nightwing dragons do awful experiments, discovers why the Nightwing queen keeps herself hidden, meets the “alternate” dragonets of destiny, and starts to realize what’s really going on behind everything. One of the evil, machinating older Nightwing dragons literally pitches the young dragonets against each other, but instead of succumbing to the temptations to fight Starflight cautiously makes friends with some of his peers. I really like his character, even though he struggled to find his voice. I found him just as interesing as Glory was, for different reasons. Starflight is worried the Rainwing dragons will think he’s come back to the Nightwing kingdom to betray them, but he manages to kind of save the day in the end, getting messages across (via a magical object) and delightfully, the Rainwing dragons in spite of their laidback attitudes and lack of fighting skills, prove they have means to overcome their enemies without using brutal force. The biggest shocker came at the end though, when the scheming older Nightwing reveals to the dragonets that he made up the whole prophecy thing. No wonder he was trying to force things to go his way. The young dragons are reeling from this revelation, it makes everything they’ve worked for so far seem worthless.

There’s so much to like in this story, I can’t help leaving a lot out. In spite of the dark aspects, there’s lots of charming moments between friends, and funny bits. In spite of the violence and distrust going on around them, the five dragonets staunchly keep asserting their goal- to find a way to peacefully end the war. To help the other dragon tribes get along, not solve everything by killing each other. Their ideas seem odd or misguided to most other dragons, but some of them are starting to come around to this new viewpoint.

And I’m getting more intrigued by the glimpses we have of “scavengers” or the humans in this world. I suspect they’re going to have a role in what happens with the dragons at some future point. Every now and then one of our main characters will come across a few scavengers and take pity on them (because the eyes look so intelligent) and carry them to safety or simply refrain from eating them. Then they move on without another thought. I wonder if this is starting to affect the humans- do they notice that some of the dragons have mercy, will it influence their behavior, perhaps they’ll turn a hand to help the dragons out (unexpectedly, because they’re so puny!) hm. Just me speculating here.

More opinions: Charlotte’s Library
anyone else?