I feel like there\’s no real way I can do this book justice, particularly as my mind has been very distracted lately, but here\’s my impressions anyways. Catching Fire takes off directly where The Hunger Games left off. Having survived the brutal Games, Katniss should have a life of ease now, with a house of her own, more money than she knows what to do with, friends right next door. But of course since she blatantly thwarted the Capitol in her move to win the Games, they\’ve got their eyes on her. Unwittingly she finds herself mixed up in the throes of a rebellion, and thrown into danger when she least expects it. Once again forced into the arena of the Games, she must depend on her wits to survive, hopefully to pull her friends through as well. Things are in turmoil, danger is looming, the government is seething with corruption, people have hidden agendas etc etc. It\’s always hard for me to write about sequels without giving too much away so I think I\’ll just stop there. Honestly I was quite surprised at the turn this book took, I wasn\’t expecting the events that rose up, at all. And even though it was my escape-read of the moment, which meant I didn\’t really get lost in a gripping story but instead used it to distract myself before going back into the real (lately often unpleasant) world, the last page had me immediately wanting to pick up Mockingjay to see what happens next. It\’s got that kind of cliffhanger, to grab my attention even when I wasn\’t really trying to give it. Yeah, I\’ve been a pretty lame reader of late. And still I can tell you this is a good read. It\’s got angst, rebellion, love, action, suspense, intellectual challenges, survivalist moves, futuristic weirdness (which always intrigues me)…. I just wasn\’t in the mood to give it all my appreciation. For that reason probably going to wait awhile until I read the third in this series. So I can give it its due. Properly.

Do the book a favor and read a few of the reviews linked below.

who else? I know some of you\’ve read it!

This blog is experiencing an interruption of its normal publishing schedule, for now and into an unpredictable amount of time in the future…

Seeing as it\’s been over two weeks since I last posted and I am still lingering in the middle of a book, I suppose it\’s time for a notification of sorts. I used to be so good about posting regularly, even finding thoughts to share on past reads when I hadn\’t recently finished a book. But a lot has changed in my life recently, including the start of a new job and a pending move. I am lucky to be able to work from home, but between the kids and the work hours there is little-to-none \”me time\” left. I\’ve been reading Catching Fire for weeks now (and its the kind of book I normally would not be able to put down!) For the most part my reading has been in little snatches, mostly simple, entertaining stuff like Thornton Burgess stories (which no one else seems interested in) or fascinating but still relatively short articles from back issues of National Geographic. I have one promised review copy sitting waiting on my shelf but after that will no longer be accepting books for review, until further notice. So my blogging activity is going to be very sparse now, with posts here just once a week or even less frequently. Just didn\’t want you all thinking I\’d fallen off the face of the earth! I\’m still here, just very occupied in this new phase of my life.

As a good indication of how upside down things are around here, my blog turned five years old last month and I didn\’t even notice! 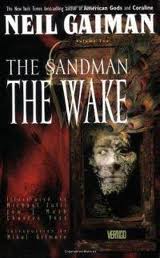 Once again, I\’m a bit disappointed to say that Sandman didn\’t quite wow me like I kept hoping it would. I feel like it\’s a failing on my part, though, not at all a reflection on the works.

The main part of this book is about the wake held in memory of Morpheus, for he has passed on and his son Daniel taken his place as the new Dream King. Loads of characters from the previous volumes make an appearance, quite a few which I didn\’t really remember well (wished I had all the previous volumes on hand to flip back to). Morpheus\’ previous lovers remember him in their own ways (some say a lot, others nothing at all), his family members take turns speaking, many many others have their say but most of them are just alluded to. I did chuckle at the Batman bit, and I haven\’t even read those, just know what I\’ve picked up from pop culture and a few films. On the other side of this story we see the new Dream King adjusting to his new role, meeting the denizens of the realm, bringing a few servants back to life, etc. The raven gets quite a big part as he grieves Morpheus\’ end and tries to decide if he wants to stay on and serve the new Dream King (who proves quite soon that he\’s a different entity from his father, even if in the same role and now bearing the same knowledge…)

There are several shorter stories at the end, one showing Hob (still one of my favorite characters) attending a renaissance fair with his present girlfriend, and complaining about how unlike the past it really is (which made me laugh, as I\’ve often wondered how accurate any kind of re-enactment is to what it purports to remember). Hob is disgusted by the revelry and bad pronunciations of old English (or whatever it\’s supposed to be) and goes off to get drunk when he meets Death who informs him of Morpheus\’ passing and offers him the opportunity to end his long existence as well…

Another little tale is of an old man sent into exile. While crossing a vast desert he rescues a kitten, then wanders into the outskirts of the dream realm, where he meets his dead son and then encounters the Dream King himself, has a brief conversation with him, finds his way out again. Lovely brushwork illustrations in that one.

The final story is about Shakespeare writing The Tempest (a play I really like) under Morpheus\’ inspiration. Interesting stuff. But still, for some reason parts of the book I enjoyed most were the eloquent introduction, and the quirky artwork at the end portraying the artists/contributors! Another thing I really do like about these books is to see how the various artists depict the same reappearing characters in their very different styles. It\’s really intriguing to see how I can recognize their faces and gestures even when they come from the stroke of a different artist\’s pen.

This is the last book in the Dream King\’s story arc, but I find quite a few other companion volumes listed in the back, like The Dream Hunters (which I think remains me favorite)- one that has stories featuring each of the Endless family members, another pair of volumes about his sister Dream, etc. I think I might enjoy those, so going to look for them someday.

In this little book Peter Rabbit is suddenly feeling restless and lonely. He needs a change of scenery so leaves his home and visits the Old Pasture. On the way he has a narrow escape from an owl which leaves him injured. Hiding in a strange place with smarting wounds, Peter is miserable for some time but then starts exploring the new environment and his spirits lift somewhat with the adventure of it all. He learns that another, larger and older rabbit, lives in the Old Pasture territory and has a few scrapes with the stranger. Almost ready to give up fighting and go home when he discovers another rabbit lives here as well: a gentle, timid rabbit with soft eyes- a girl rabbit, of course! So Peter is determined to stay and make her acquaintance, and he ends up taking her back home with him as his new mate. The two rabbits set up housekeeping and of course soon start a family, although they try to keep that secret hidden for a while. Having read quite a few of these Burgess books by now, I soon recognized a pattern of a restless young male animal going off in search of adventure and then finding a companion. This one reminded me a lot of the woodchuck\’s story. None of the usually present moralistic themes jumped out at me (but then I read a lot while tired, and in bits and snatches) aside from the one of minding your own business, as lots of Peter\’s friends wanted to poke their noses in where they weren\’t wanted, when he suddenly returned home with Mrs. Peter!

It\’s funny that I never thought of the Mrs. Peter Rabbit character before as Peter\’s wife. I\’ve read several of the books out of order, so met her before and she was always worrying about Peter\’s recklessness and chiding him; sounded like a mother to me, I guess! (Also, I have a perpetual image in my head of Peter as the Peter Rabbit from Beatrix Potter, who was always a young bunny living at home with his mom).

My computer is out of sorts so if you\’re reading this post with no cover image it\’s because I\’m not working on my own computer; I\’ll post images up soon as it\’s fixed!