An Exploration of Avian Intelligence
by Nathan Emery 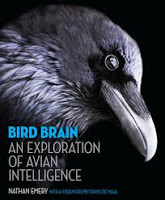 The term \”bird brain\” is a complete misnomer, according to this author. Many birds are highly intelligent, having thinking abilities on par with apes in some cases, and using skills and faculties beyond our own, in others. The book is divided into sections exploring how avian intelligence may have evolved, their abilities to navigate long distances and utilize spatial memory, their communication skills, social intelligence, tool use and tool-making, perception of self and more. A lot of the studies in the book were done with birds renowned for their smarts- parrots in some cases, rooks, jays and crows in most. Other studies used chickens and pigeons. The difference in learning things by mimicry rather than trial and error or deduction is pointed out. I was impressed with the aptitude that rooks have for solving problems- usually presented with a task to retrieve food by choosing a correct tool, making a tool or using cooperation. Most surprising (to me) was to find that when presented with the same problems to solve as the rooks, children under five usually failed the test, even up to twelve-year-olds didn\’t always solve it as quickly. So these birds really are smart. The ways in which scientists studies how well birds can plan for the future was really ingenious. And unlike other books I\’ve read on animal intelligence, this one actually shows maps of the brain, comparing the connections between different brain regions (and their relative sizes) with how similar connections function in humans and other animals.

While the book impressed me with its fascinating information, I was disappointed in the presentation. The chosen photographs and executed illustrations are good quality, but the font type for the main body text is lightweight and a tad small, so it takes some focus; I often found myself physically tired of reading and put the book down to return to later. Also noticed many typos, which became really irritating the further I read. But in all, an impressive volume that overturns ideas of birds as being dim-witted or simple in nature.

A Lion Among Men

It\’s been a long time since I first read Wicked, I picked this one up for something different. It didn\’t work well for me. It\’s very- dull. Interesting to see the perspective of how Brr the Cowardly Lion grew up an abandoned lion cub in the wilderness (although that part is way too brief) and how his indecisiveness and misfortune at being in the wrong place at the wrong time earns him the label of a coward. Also there\’s a subtle examination of the difference between Animals (talking) and animals (mute) and human intelligence- this wasn\’t in-depth enough for me either. What philosophizing there was often went over my head or seemed to stray far from the point. The characters talk in circles. Far too much of the book consists of this interview between the Lion and Yackle, a elderly crone of a seer who admits to being a quack- it goes back and forth between the two of them telling their past histories, steeped in the politics of Oz as Maguire has imagined it, and the story never really goes anywhere. At least, I couldn\’t see where. Quit halfway. The details are admirable, the storytelling is too slow. I did like the part with the bears, that was amusing, and with the ghosts- that was interesting (and I usually don\’t like ghost stories). But the rest, really made my mind wander.

A Photographic Journey with the Chincoteague Ponies and Assateague Horses
by Jayne M. Silberman 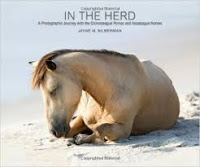 This gorgeous book about the wild ponies that live on Assateague Island fills in all the gaps I felt with the earlier read. It tells in more detail how the ponies live on the island, their social structure and daily activities. The author, an excellent photographer, followed the ponies into more remote areas of the island and shows them in private moments- napping on the sand, grooming each other- as well as more active images of them running through the surf, stallions fighting, and of course the famous pony penning day. There are more details about that, too- which answered a few questions I had. Mostly I loved looking at the pictures. They are simply beautiful. While the focus in on the horses, there are also some pictures of other wildlife that shares the island habitat, plant life and scenery. Some images are just about texture- pony hair blowing in the wind. It\’s a real celebration of the beauty of a wild place. 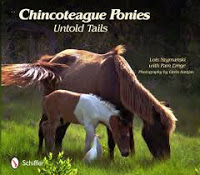 This book caught my eye browsing at the public library a few weeks ago, and I finally got around to enjoying it. It\’s about the Chincoteague ponies, mostly spotlighting individual ponies and the stories behind their names. Some small incidents or characteristic behaviors that are related give it a bit more storytelling, but really after the brief introduction about where the ponies came from, how they survive on the island and how their population numbers are managed, it\’s mostly just photographs (and paintings) showing the ponies and pointing out their names and heritage. Very nice to look through.

Side note: for the first time ever I understand why cowbirds leave their eggs in others\’ nests. The birds followed herds of cattle or migratory bison, feeding on insects stirred up by their hooves. They did not stay in one place long enough to brood the eggs, so somehow evolved the behavior of leaving their eggs for other birds to raise.

Borrowed this book from the public library.

Seafarers of the North Atlantic
by William McCloskey

This book is about fishermen. Not casual sportsmen but those who ply the ocean for their daily living. It\’s also partly about the economics of the industry, the history of various regions and how fisheries are managed. Mostly a close, personal look at the men who catch fish for consumers, and what their daily labor is like. It sounds like throughout history, the lot of fishermen has been a hard one, although modern machinery and conveniences have improved a lot of things, they also have a detrimental side…

McCloskey himself really enjoys being on the ocean. He was able to write such detailed, personal depictions of fishermen because he volunteered to go along, pitching his weight with the crew and working alongside them. Thus learning something of the various skills involved (often refrained from, or denied, doing particular tasks aboard that required certain dexterity and practice to avoid spoiling the catch) and earning the respect of the men, who would share stories and explain things to him. He shows the hardships they endure and the freedom they enjoy, and also a bit of local culture, some of which remains unchanged through centuries (in one region the men looked askance at him for eating the skin of his potatoes at meals!)

The areas he visited included New Bedford, Gloucester, the Newfoundland Grand Banks, the coast of Labrador, Chesapeake Bay and Norway. In each region he spent time both among permanent residents of fishing communities (often very isolated) and also transient folk, who were only there during the main season. He went aboard big ocean trawlers that fished in international waters and smaller boats that stayed closer to shore. He helped place seine nets, longlines and dredging equipment. He went tonging for oysters and even accompanied some men on a sealing hunt- one of the few places where the locals met him with deep suspicion- their livelihood seriously threatened by \”save the seals\” environmentalists who protest the clubbing of seals as being cruel. But McCloskey shows how efficient their methods were, and also the long-reaching impact when sealing was outlawed in many areas- the resulting population boom of seals then impacted fishermen- starving seals tangled their nets far more often than the fish they wanted to catch. There are other parts of the book that show how regulations made by lawmakers often don\’t work out the way they\’re supposed to, how fishing methods can be vilified, how the issues of overfishing pressure on the oceans isn\’t as simple as it seems…

And probably a lot of this has changed in the decades since the book was written. It felt insightful to read it, though. The author writes well, describing places and people vividly, often breaking a laugh from my reading demeanor. Some parts about the fishing rights and international treaties and how catches are measured and so on can be a bit dry, but overall a good read.