Home Ground by Allen Lacey
Findings by Kathleen Jamie- Read Warbler
The Essential Earthman by Henry Mitchell
The Fate of Mice by Susan Palwick- Snips and Snails
Gone to Croatan by James Koehnline
The L-Shaped Room by Lynn Reid Banks- Shelf Love
We Took to the Woods by Louise Dickinson Rich
The Subversive Stitch by Roszika Parker – The Indextrious Reader
Maxwell\’s Ghost by Richard Frere- Vulpes Libris
Out in the Midday Sun by Elspeth Huxley
Counting Sheep by Phillip Walling- Farm Lane Books Blog
Wild Heart by Anne Neimark
Dragon Trials by Ava Richardson- Snips and Snails
Joy Adamson: Behind the Mask by Caroline Cass
Too Late the Phalarope– Alan Paton
It\’s All in Your Head by Suzanne O\’Sullivan- Farm Lane Books
Being a Beast by Charles Foster
Everything is Teeth by Evie Wyld- Farm Lane Books Blog
Exotic Aliens by Valmik Thapar
Off Leash by Daniel Potter- Snips and Snails and Puppy Dog Tails
Fox Tossing, Octopus Wrestling and Other Forgotten Sports by Edward Brooke-Hitching

The Curse of the Good Girl

Raising Authentic Girls with Courage and Confidence
by Rachel Simmons

This book is about teaching girls to be true to themselves. The first half shows examples of learned behavior patterns that can be problematic because girls use them to diminish their feelings, avoid confrontation, deny culpability, sidestep real issues between friends and so on. All in the name of being \”good\”- nice, apologetic, demure and selfless. At first I thought it was ridiculous, the idea of good behavior becoming a negative thing, but the author makes the case that it\’s about putting on a good appearance at the cost of everything else that can be a problem. Which leaves girls unable to resolve issues, communicate effectively, speak up for themselves or even recognize when relationships need improvement. She sees serious trends of girls unable to accept and build upon criticism, girls who apply all-or-nothing rules to their friendships and then carry those on into professional settings later in life, which only hinders them. The author systematically examines the \”good girl\” ways of being that are problematic, and then describes how to go about learning different patterns of behavior that enable girls to be more forthright, confidence and sincere. Using examples from real situations that came up with girls who attend her workshops (often with their mothers) she shows how to work through it. There\’s no perfect answer, but there are better ways of finding them. I saw myself a lot in this book. And my daughter. I hope I absorbed enough of it to attempt making some changes of my own for the better.

I borrowed this book from a friend. 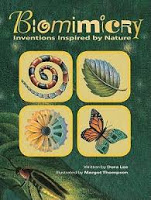 I picked up this book at the library just because the cover and title caught my eye. It\’s a book about human inventions that were inspired by things present in the natural world. Some of them I already knew about, even if when the book was written they weren\’t actually made yet, just being researched. There are robotic hands now, that move realistically. Tiny machines that mimic the flight mechanism of insects. I knew about the observation of cockleburs that inspired the invention of velcro, and I\’d heard of nanobots that can carry information into the body the way viruses invade. But I didn\’t know before that wind tubines have bumps on the leading edge of the blades, like a humpback whale does on its fins to avoid stalling in the water during sharp turns. I didn\’t know of this building in Zimbabwe which has an air-conditioning system inspired by termite mounds (this interesting article refutes some of the science behind it), or that bullet trains were quieted by modelling their noses after a kingfisher\’s beak- so very streamlined they enter the water with hardly any splash. I\’d never heard of a device that collects energy from the motion of ocean waves, even though it was conceptualized before 2008!
That\’s just a small sampling of the material in this book. There\’s a lot to spark curiosity and admiration. I didn\’t mind that the examples were brief- after all, it is a kid\’s book. I did wish that they were identified more clearly, or had a listing in the back of where the sources came from. However all the things I wanted to know more about, I found easily enough with a brief search online.
Rating: 3/5      40 pages, 2011

An Irish-American librarian promotes a project that will take books to remote, semi-nomadic tribes in East Africa. More than that, she travels to Kenya to see the project first-hand, and accompany the books into the bush. The mobile library travels by camel, the only reasonable mode of transportation in the area. I kind of hoped this story would be about culture and place, but it is mostly about people. How the arrival of library books in the dusty village of Mididima affects distinct characters in very different ways. To the American woman it is a way to spread literacy and bring the modern world to a \’backwards\’ area. The African librarian from Nairobi (who is in charge of the actual books) is a lot more skeptical about the program\’s success. While the children of the village see the arrival of foreign books as something new and exciting, many of the adults in Mididima view them as a threat to their way of life and culture. Or merely as ridiculous for their lack of application to the situation (what good is a cookbook to a tribal villager, who doesn\’t even know what most of the ingredients listed are, much less have access to them? what good to their children a book about pop stars in England?) While the American woman realizes a lot of the books are useless or inappropriate in context, she still insists on the importance of the literacy program. One village woman uses the bookmobile\’s arrival time for clandestine meetings with a man who is not her husband- as nearly the entire village is then gathered around the camels. A young girl sees the library as an avenue for her to escape to Nairobi and further opportunities. The village schoolteacher, the drum-maker, the elders who lead the tribe, they all feel the implications of foreign ideas introduced via the camel library. But there is another person in the village who sees the books as a tool for something quite different. This boy was mauled by a hyena as a child, and is feared and shunned for his disfigurement. One day when the camels come to retrieve the library books, he does not return the two he had borrowed. This would seem insignificant, but to the Nairobi librarian it is a great offense, and to the villagers possibly calamitous, as it brings shame and fault upon them, and they expect severe retribution from the elements… Due to the (fictional) quotes at the head of some chapters, I really thought mosquitoes (or some disease brought by them) would figure in some key event in the story, but that never happened. I suppose they were merely symbolic.

An interesting story. Of course I liked the bookish aspect and the wide view of the very different things a mobile library could mean to so many people. I was surprised and pleased at what turned out to be the boy\’s use of the books, even though it meant they were destroyed. And the reactions that got. And the ending- it was not a pat, feel-good ending like I expected, but fairly realistic. I enjoyed the story and its implications, but the author\’s light writing style is not quite my thing. So while I liked it for an easy read, I won\’t be keeping this one (it came from a thrift store).

There is a real travelling camel library in Africa that inspired this novel. You can read more about it on African Library Project and at the Camel Book Drive.

This is one of those books that gets a high mark form me not because it was an enjoyable read, but because it is an important one. The author reports on what she found after crossing the country interviewing girls ages thirteen to nineteen. She sat with them in public places or in their homes, with groups of friends or with their parents by their side. She went to parties and beaches and bars with them. She talked to kids in middle school, high school and college. Mostly she asked them questions and listened to stories regarding how social media is affecting their lives. It is definitely eye-opening and disturbing.

This book makes me feel old. I never was part of the larger social scene at school, but even I can tell that things have changed drastically from when I was a kid, to what is portrayed in this book. It sounds like kids no longer really go on dates, they no longer hang out to just get to know each other or have fun. They do most of their communicating online, and it a constant thing. Its a constant competition, with girls involved in posting pictures of themselves in a heightened striving for popularity. Boys viewing porn at a very young age and assuming what they see is what girls want in terms of intimacy. This really screws up their understanding of what relationships should be like, and from all reports, it is terrible for girls\’ self-image. There\’s a lot more in this book, about substance abuse and underage drinking, about obsessions with appearances and the number of \’likes\’ received on social media platforms. But most of all the large message that leaped out was: kids are exposed to way too much, way too early and it is changing their lives in ways we don\’t really understand yet.

What\’s really confusing to me are some opinions the author reports finding among women. That they feel like exercising their right to show off their own bodies and be \’confident\’ in how they look is feminist. But it sounds like they wind up objectifying their own selves- and when boys treat them in a degrading manner in response to that, they either end up with crushingly low self-esteem (leading to suicide attempts) or train themselves to not care, making the experience of casual encounters even more meaningless. They sound dissatisfied, bitter, cynical, unhappy, stressed, lonesome and even wistful for the past they see depicted in movies made in my day- when kids asking each other out and dating (not just \’hooking up\’), was the norm.

It\’s all very sad and distressing, and electrifies me with urgency to talk with my kids about the dangers of getting caught up in this kind of vicious online battlefield of compromising pictures and comments- all the backstabbing, blackmail and reputation smearing that can happen. Once you put something out there, you can never take it back. I just don\’t know if telling my kids will be enough.

end of the Dare!

Completed the TBR Dare yesterday! I read twenty books, but added quite a few new ones to my shelves, so it didn\’t really clear any space off. I still have several stacks piled on the floor. It was nice to get through them. They were not all keepers, but I didn\’t abandon any, so at least all were good reads. I think my favorites of the lot were My Weeds– very informative! and Cry, the Beloved Country– a book I\’d had for a very long time and am glad I finally read it.